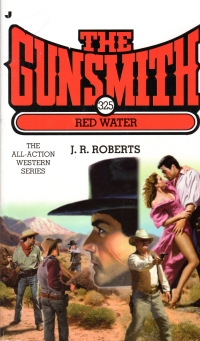 In case you’re wondering, it looks like it takes about nine months for me to forget how much I don’t like a series. I read A Daughter’s Revenge last May, and it took me until February 2015 to pick up this book.

Clint Adams, the Gunsmith, is camped out when clumsy horse thieves try to get the drop on him and steal his horse. He outfoxes them, goes to a nearby town (Red Water of the title), has an, erm, encounter, discovers the local marshal is forming a posse to hunt those dangerous (but clumsy) outlaws. The Gunsmith thinks that’s odd, and when he joins the posse after an, erm, encounter, he finds the marshal doesn’t have a plan for all the town’s decent gun handlers except that they’re out of town. Apparently, the marshal is in on a scheme to steal the plans of safes made by a local safemaker. Which Adams thwarts amid the, erm, encounters.

Of the contemporary Jove Western series, Longarm is the better of the two. As to the Gunsmith series, I think I’ll put them on a higher shelf and avoid them until I forget, again, how I feel about them.