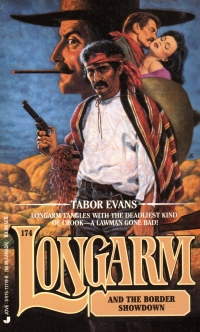 I picked up this book, and I was all like, “Shazam, how different are these titles in the same series?” For lo, although the book started out with a bit of gratuitous hey, sailor contact for grandfathers everywhere, the paragraphs were longer, deeper, and richer than I could have expected. But then I realized I’d confused this, a volume in the Longarm series, with the entry in the Gunsmith series that I’d read earlier. And they’re night and day.

In this book, Longarm is a Federal marshal sent from his normal Colorado range to Laredo, Texas, to investigate a fellow Federal marshal who might have gone bad and might be helping crooked local authorities in smuggling operations. So Longarm picks up an unlucky gambler traveling partner and heads down to pose as a merchant who can happen to come across a large number of Federal weapons to sell.

As I mentioned, the book is deeper and richer in prose and its set pieces take a little work. It’s got some, er, amorous scenes, but it’s also got its limits in that area; there are apparently some women the main character won’t touch. Additionally, the book reads like a Western with its painting of frontier towns and–who would think it?– concerns about horses and transporting horses.

So I liked it as a lighter read, and its linear story telling allowed me to put it down and not have to go back to see if I’d forgotten a three page jump cut scene with important information that I’d read and forgotten the night before.

So as I get older, I’m finding myself looking forward to good genre fiction and classic literature for pleasure reading than modern thrillers and detective novels. Fortunately for me, there is plenty of both on my to-read shelves. Also, should I want to get into this series, it’s apparently still in production 20 years after the release of this book, the 174th in the series. It’s up to 436 novels done or in planning, 30 Giant novels, and 4 Double novels (according to Fantastic Fiction). So I’ll keep my eyes open for these titles at the book sales in Ozark and in Clever. And someday I’ll gut out others I own in the Gunsmith series. When I need penance for something.

1 thought on “Book Report: Longarm and the Border Showdown by Tabor Evans (1993)”