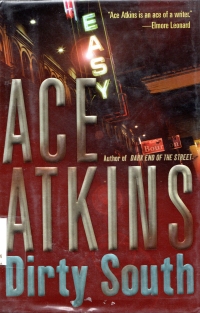 With this book, I decide I don’t like Ace Atkins’ books very much.

This is one in his Nick Travers line of books. Travers is a former New Orleans Saints linebacker who becomes a college professor, one who teaches only a class or two and spends most of his time researching blues music and interviewing old blues musicians. And doing favors for friends, favors of an investigative nature. Also, he becomes a bar owner during the course of the book and begins rehabbing/resuscitating his favorite blues bar. Also, he’s seeing a woman in Mississippi, but he spends a lot of time in New Orleans away from her, especially while on this case.

A fellow former football player, now a rap record mogul, turns to Nick when the new fifteen-year-old sensation is ripped off and when the rap mogul needs to come up with a large amount of cash to satisfy a loan from another rap mogul. So Travers looks into it amidst the other series business.

This book include the flaws I didn’t care for in The Lost Ones and Cheap Shot. Chief amongst them is how much of the book is spent on the series business and not on the efforts of Travers to solve the problem at hand. He gets a dog. He meets with his girlfriend, but she does not serve as a philosophical foil a la Spenser’s Susan Silverman. He kind of tries to mentor the fifteen-year-old by taking him to a friend’s farm, where he’s expected to do manual work to find himself (compare to Robert B. Parker’s Early Autumn). He gets ownership of a bar and works on it with friends; its opening serves as the triumphant end book. Most of these things do not apply to the actual plot of the book.

A good book, and a good series book, works the plot first and then a little bit of series growth and movement as the plot unfolds. In this book and others in Atkins ones I have read recently, the overarching movement of the series occurs at the same time and independently of the actual individual book’s plot. I’m not sure you even saw that in the late Parker as starkly as you see it here. Perhaps it’s the 21st century way–I don’t read that many modern series, as you know.

Also, this book offers three points of view: The first person of Nick Travers; a third person limited omniscient focus on one of the bad guys in scenes to show us how bad he is; and the first person of the fifteen-year-old. The perspective of the fifteen-year-old and all the scenes there only give us the flavor of his perspective and don’t advance the plot. The third person of the bad guy only serves to show us how bad he is. Well, okay, they show a little of relationships that prove important to the plot, but the scenes aren’t really necessary to show the relationships. They don’t even really humanize the bad guy or add depth to him; they just illustrate he’s a bad guy. And he’s just a level boss, not the big bad guy..

I’m not sure whether these extra scenes and extra points-of-view merely padd the book up to hardback size or if they’re intended as what my fiction professor told our workshop were nice little moments. But they slow the book down quite a bit.

Additionally, the book is built out of short chapters jumping around amongst the points of view and into and out of the plot. This doesn’t suit my current reading style, which is just a brief twenty or thirty minute session at night before bed. I found myself having to re-read preceding chapters to ensure that I hadn’t forgotten something out of left field that I’d read the night before. With a more linear book, I can recap by simply finding my place in the book.

At any rate, I only picked this book up because I dropped by the library when I was going to have an hour available for reading and nothing to read on hand. Unfortunately, I didn’t find a short history summary book and ended up with this book. Next time, I will try harder. Or make sure I’ve got a paperback in reach at all times.