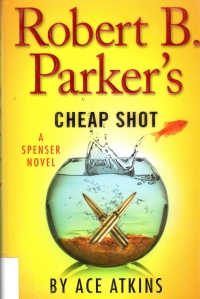 I was not particularly impressed with this book. Perhaps I read it too soon after The Lost Ones and found too many of that book’s flaws in this one.

In this book, a New England Patriots linebacker hires Spenser to look into some people who were following him. Spenser is not sure if it’s someone associated with his second wife who has a sketchy past or if it’s related to a nightclub shooting where someone died and the linebacker might have been responsible. So Spenser does some sleuthing and follows some false leads to make it interesting. Nobody in the Patriots organization wants him hanging around, nor does the linebacker’s agent. Then the linebacker’s son is kidnapped and held for ransom, but the linebacker instead offers the ransom as a bounty on the kidnappers. Hey, haven’t I seen that in a movie? Spenser then follows some other leads and saves the kid after some danger. The end, except one of the bad guys is untouched, which does not bring closure to the story and leads into next week’s episode.

So Atkins’ writing sometimes seems as informed by television and movies–where he makes allusions to celluloid instead of print, and by “allusions to” I mean “he borrows from.” His writing style when affecting Parker’s is better still than the mid-to-late Parker, but I’m hopeful that he gets more original with further books.

Also, SUCKER PUNCH ALERT. Okay, Atkins is wise to steer away from political commentary within the books–which means he’s probably a conservative, but Spenser repeatedly mocks people for wearing suits from Men’s Wearhouse. Hey, I own suits from Men’s Wearhouse. And they’re a far step above the slacks and button down shirts I get at Walmart that are my daily apparel. Also, one of the cheap foils for Spenser and Hawk’s masculinity claims to be a second-degree black belt in Tae Kwon Do, but he crumples with a single blow from Hawk. Hey, I am studying Tae Kwon Do (mixed in with a couple of other disciplines). I know some second degree black belts, and I’d like to think they’d put up a bit more of a fight (although, in full disclosure, in my started-but-incomplete follow up to my first, unpublished novel, the protagonist squares off on a fellow who goes into a fighting stance. “Tae kwon do?” my protagonist asks. The bad guy nods. Then my protagonist drew a semiautomatic and said, “Meets some urban ninjistu.” So although I’m dissing it a bit, I’m not going to the extreme Atkins does). Where was I? Oh, yeah, Why is Ace Atkins attacking all of my life choices? What next, mocking an English degree? A taste for omelets? All because I’ve given him a lukewarm review on an obscure blog?

What, it’s not all about me? Gentle reader, this is the Internet. It *is* all about me. Cosmically. If only you connect the dots and dust motes.

So I’m not weaned off of Atkins’ Spenser novels or other novels because I’m hopeful others will have better things to offer. But these last two things I’ve read have not been highlights of his oeuvre.