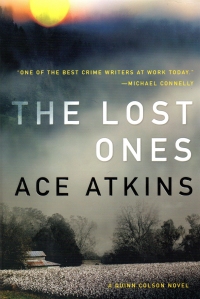 I bought this book off of the discount rack at Barnes and Noble as part of a recent binge there. I’ve enjoyed Atkins’ Spenser novels (Lullaby and Wonderland), and I didn’t think much of White Shadow (but I didn’t dislike it enough to swear the non-Spenser Atkins books). So I picked this up. New, albeit old.

I have to wonder how much television programming affects how one reads books or perhaps how one writes them. This book is the second of the Quinn Colson novels about a ranger who served several tours overseas and who comes home and ends up sheriff of his county in Mississippi (that took place in the first book, where he had to uncover some perfidy that his uncle, the previous sheriff, was part of or something–events of that book are alluded to an awful lot). As part of his duties, he’s trying to find work for a friend and fellow veteran who lost an arm; he has to find a woman who is smuggling babies for adoption from Mexico; he also has to contend with a gun-running operation working through a traveling carnival for which another fellow veteran is the supplier.

It features all the modern amenities of shifting points of view with an omniscient narrator to ensure the short attention spans of modern readers (myself included) don’t wander. It hops between the plot items and everyday life of the protagonists (and antagonists). It alludes to the past things in the series. And then it wraps up, sort of, with some elements unfixed. Maybe that’s for next week? Also, we’ve got some flashbacks to childhood while Quinn works out an episode from his past that might have turned his younger sister from the straight and narrow onto a self-destructive path. It’s a very busy book.

I’ve only seen one episode of the television program Justified, but this book felt of a kind with the pilot of that program.

I guess this sort of thing has been a part of police procedurals since the 87th Precinct novels of Ed McBain, but somehow they’ve gotten moreso. Or maybe I was not in the mood for it.

At any rate, it’s not a bad book, and I liked it better than White Shadow, but I’m not going to rush right out and buy the rest of the series.

Unless I find them at book fairs or on Barnes and Noble binges, I suppose.