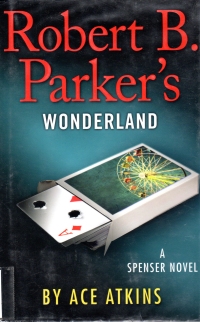 This book is the second of Atkins’ entries into the Spenser canon (Lullaby being the first), and it again captures the flavor of early Parker with some of the later tropes thrown in.

The plot centers around Henry Cimoli asking Spenser for some help. Someone is trying to buy Henry’s condo building and, when meeting resistance from some of the owners, has taken to tough stuff tactics to convince the old people to sell. Leaning back on leaners-on is Spenser’s balliwick.

I won’t go too far into it, but it is a return to Spenser trying to figure out a puzzle of many unsavory characters and whatnot. A good plot, but we never do find out who killed the chauffeur (that’s an old mystery reader joke–there are no dead chauffeurs in this book–but that might be a bit of a spoiler).

I’ll say it again: Atkins brings the depths back to the books that Parker kinda left out towards the end. Unfortunately, he does rely a lot on characters from previous books (Gino Fish, Bernie Fortunato, Vinnie Morris, and so on), but maybe paying Spenser fans really dig this. Also, there’s the train-the-new-guy subplot that’s been a part of the series since Early Autumn. I suppose it’s just Spenser being Spenser, but it’s really old ground by now.

But I liked the book and I look forward to the next. Which is not something I’ve said about a Spenser novel in a long time.