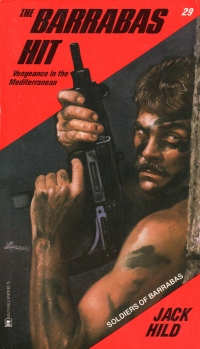 So close after reading Designation Gold, I picked up this book to really juxtapose and contrast the Marcinko books with more common men’s adventure fiction.

This book finds Barrabas set up and kidnapped in Athens by a former associate who blames Barrabas and the SOBs for a botched operation that left him disfigured. Once he has Barrabas locked in a basement on a Greek island, the man now going by Joshua leaves a trail for the SOBs to follow to lead them to his island–and an ambush.

The book starts out with the operation that went bad and then seemingly tries to play up the mystery of who this “Joshua” is. Perhaps the scene at the beginning was added later. It’s a quick read, of course, and interesting and consumable in that men’s adventure novel way.

Where I dinked the Marcinko and Weisman book about the non-first person narrator characters for seeming like NPCs, this book uses third person, so many of the characters come across that way, too. The good guys and the named bad guys are interchangeable but for a characteristic. O’Toole is the Irish one, Billy Two is the Indian one, Lee is the woman one, and so on. The plot is thinner and more straight forward than the more modern thriller (although there are only eight years that separate these two books, one is patterned on the thriller and one on the adventure novel).

At any rate, they’re different books and they suit different audiences or moods. But I experienced the flavor of each and, as I said, got the contrast acutely.

I’ve got a couple more SOBs books (and keep accumulating men’s adventure novels), and I’ll get to them as the mood strikes. The SOB books aren’t as good as the old Pendleton Executioner books, but they’re not dumpster diving like some of the paperback series are.