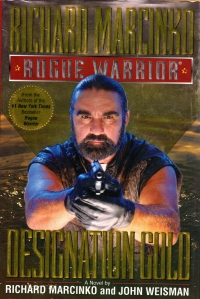 This book, strangely enough, is the first one I tried to read after I read the purportedly nonfictional Rogue Warrior, and I was immediately bogged down in the very opening of it. So I set it aside and later realized it was not the first of the fiction (Rogue Warrior II: Red Cell was, and I’ve since read that).

However, on my second go-round, I was more into it.

Within the story, Marcinko goes to Russia (ca 1997) to investigate the killing of one of his “shipmates” and his family, including Marcinko’s godson. He finds Russian gangsters, a multinational fixer, and ultimately a plot for the Syrians to build a nuclear weapon for it–or be framed for the effort in order to draw an Israeli strike. Marcinko investigates, does some action stuff, leads some set piece raids, gets thwarted by the brass, overcomes obstacles, meets some kindred spirits, and triumphs.

It’s a decent thriller, thicker than a men’s adventure novel and written with a little more depth. Many of the non-Marcinko characters do come off a bit like non-player characters where they’re only distinguished by their nickname. But the voice of the narrator is distinct and brash and, if you’re in the mood for it, a bit of fun. The definite, conscious asides about exposition, equipment, tactics, or whatever the narrator is going on about now contrasts with Clancy-esque attempts to just fit it into the narrative where it can be tedious and jarring. The voice also contrasts a bit with the first person narrator of the Odd Thomas novels, wherein Odd goes into deep musings of philosophical questions in between action bits. In these books, the narrator is briefing you, often at the presumed annoyance of his editor. It works pretty well.

Secondly, these books are coming on twenty years old, and the world has moved from a place of turmoil in the shadows to a place of overt turmoil. The plot described in the book isn’t imaginative or speculative since the Israelis have hit a Syrian site thought to be preparing nuclear materials. Twenty years ago, this stuff might have been just outside the realm of what we thought was really possible. Imaginative. Now, it seems a little more true-to-life. Sadly, it’s aging too well.

So I’m looking forward to reading the others I have (but that doesn’t mean I’ll rush right into them), and I’ll probably fill in the gaps such as I can. I have to wonder, though, if they suffer from the same eventual fate of these kinds of thrillers when they transition authorship that they will lose that which makes them special. Probably, but I have a ways to go until I get there with the series.