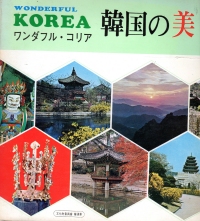 I picked up these books in Clever this spring for something to flip through during football games. And so I did.

The first, Bomun Temple in Seoul Korea, is an inexpensive tourist trinket for visitors of a Buddhist temple in Seoul, South Korea. It’s a set of photos with captions bound with string, and it includes errata such as the same page appearing twice. It focuses on the artifacts and architecture of a single temple, so it’s pretty in-depth.

The second, Wonderful Korea, is broader. It’s broken into sections by province or geographic region and has a couple photos of different temples, pagodas, parks, and museums. As such, it focuses on things you can see all over Korea. It’s broken down into districts within Korea and highlights some of the things to visit in those areas. The area around Seoul is heavily represented, and the locations are given a couple of images and sometimes a couple of artifact images, but it is by design not very detailed about any one location. The book also includes a number of maps to help you get around Korea and the districts in each chapter, and amid all of the eastern architecture and art, there are dots on the map for the local YWCA. Which would now be historic, but were then contemporary.

Takeaways from flipping through:

Still, I’m glad to have looked through them. I have a couple more from that score this spring and I’ll keep you apprised as I go through them, but I imagine my reaction will be similar.