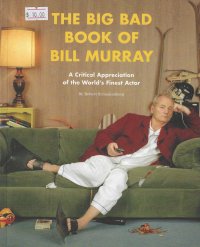 I bought this book for $10 at Rublecon last month because it’s BFM, man. Its subtitle says A Critical Appreciation of the World’s Finest Actor, which is a bit of hyperbole, of course, but the book is not so much a critical appreciation of Murray’s work, but rather an encyclopedia of alphabetical entries about movies and shows he has appeared in along with topics on his relationships with other people, including his wives and his family. Interspersed with the encyclopedia entries, we get stories about Murray’s hijinks crashing parties and spontaneous appearances with normal people.

So we agree that Groundhog Day and Lost In Translation are amongst his best films, but I disagree with the book about The Man Who Knew Too Little–I think that’s a funny movie, and I not only saw it in the theaters, but I’ve watched it many times since then on home media. I am quite a bit behind on Murray films–I mean, I’ve never seen The Razor’s Edge or Quick Change, for example, not to mention most of the Wes Anderson collaborations (although I did see The Life Aquatic with Steve Zissou, again, in the theaters).

The book also portrays Murray as a complex individual. Although it has its moments of homerism (such as the subtitle), some of the disputes and fallings out he’s had, not to mention a couple of bad divorces, and a reputation of being difficult (Dan Ackroyd called him The Murricane because of his mercurial nature). I mean, I guess anyone who’s been paying attention to Murray as a celebrity probably knows all this. But I somehow haven’t paid attention even though I like his work.

So a pleasant read in between chapters of other things I’m kinda reading, which really means they’re just stacking up on the table beside my reading chair. Informative. And I’m kind of pleased as well that I have so many Bill Murray films yet to see.