ALBERT PUJOLS MADE HIS PITCHING DEBUT ON SUNDAY:

Albert Pujols did something Sunday that he hadn’t done in his previous 2,987 regular season career games – he took the mound.

With the Cardinals safely ahead of San Francisco 15-2 and looking to save the arms of the pitching staff, Pujols was called on to toe the rubber in the top of the ninth. It marked the first time in his 22-year MLB career that he’d pitched in a game.

His stats were memed as follows: 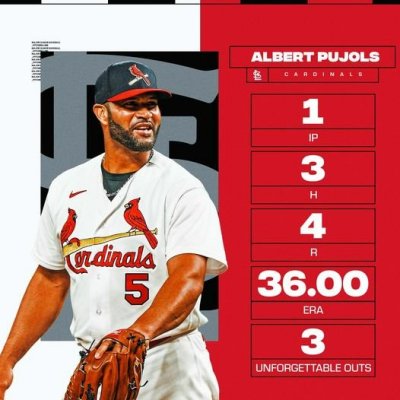 As I like to point out, and did on Facebook, he’s worse than José Oquendo, whose ERA was 12.00 with six innings pitched in three games.