When I was reading this week’s Houston Herald, I kind of glanced at the “Years Ago” corner of the paper.

All of them have it: A page or part of a page where they reprint pictures or summaries of articles from the newspaper in years past so that the old people, aside from me, the old people who’ve lived there their whole lives can revisit some things they might remember. They might see their friends, or their family friends, in the pictures and stories kind of like they want to see their friends and family friends in print in the modern paper for good things, but not for the meth busts. The “remember when” features tend to look more toward the positives unless something really notorious is recounted.

So I kind of glance at these things because I’m a carpetbagger in these parts, which is often different from the parts from which I take the newspaper, such as the Houston Herald. I have driven through Houston twice: once out and back on a trip to De Soto, Missouri, from Nogglestead. That trip yielded me subscriptions to the Houston Herald and the paper I sought ought to begin my subscription adventure, The Licking News.

So I only glanced at the family portrait at first. Then I looked again. 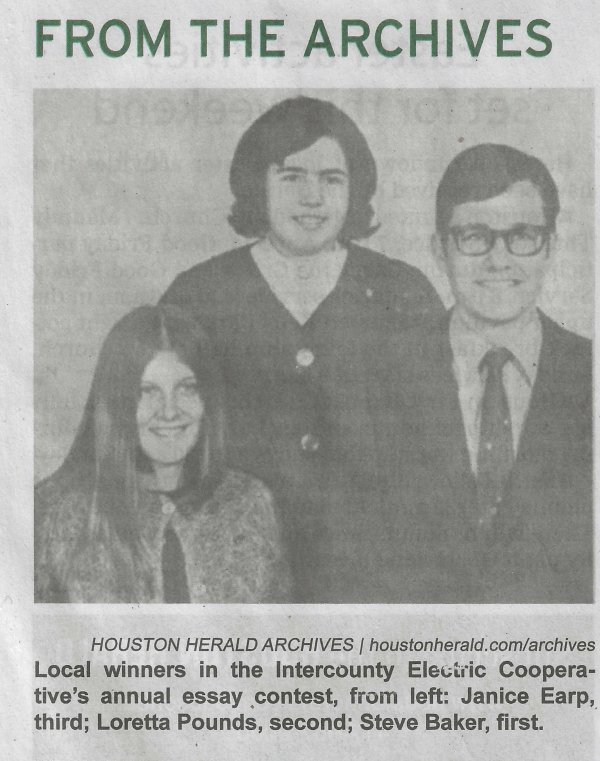 It’s not actually a family photo; it is a picture of winners of the electrical co-operative’s essay winners.

Which probably means that they’re in high school.

The photo is undated, but I’m guessing early 1960s.

I’ve mentioned before how kids from the 1960s and earlier looked older (see They Don’t Look So Young, But…. and Scandinavian Teens Circa 1965).

I don’t think I ever hit that middle-aged look, the responsible father–in old family photos we have with my beautiful wife and young boys, I still looked young. Kind of how I still think I look young in the mirror, but in the photos–I certainly look older than I think that high school kid above looks. Which is a bit of a change for me.