So the local papers to which I subscribe often have a “Remember When” sort of feature every week where they comb through their morgues and come up with news stories and photos that can fill column inches easily. Also, probably, their regular subscribers are generally older and have probably lived in the area for a long time, so when they go back twenty or fifty years, you might see someone you recognize. I just tend to glance over these sections, even though I sometimes linger on the ones from thirty-five years ago because they remind me of when I was young even though I was not young there, wherever there is.

This last week or so back–paper delivery was delayed because of the weather–the Douglas County Herald offered a picture of the the Ava High School Homecoming Court of 1969: 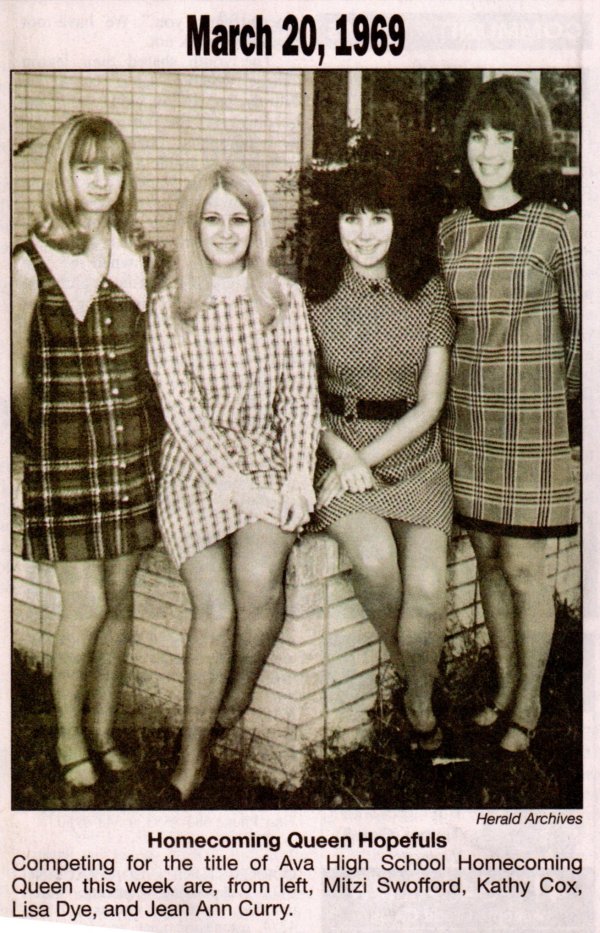 Those girls are, what, two years older than my oldest? But they look so much older. Partially probably because it’s black and white and partially because they’re wearing the clothing that my mother wore in some of her pictures, and my mother was old to me when I was young and my mother was younger than I am.

But, wait, look closely at the faces.

Ah, yes, now I can see teenagers in those old people clothes.

You know, I don’t know if fashion has flatlined since I was younger, but the clothes I’m wearing in the pictures from thirty-five or forty years ago pretty much match what I wear now, casually, and the khakis and dress shirts I wear when going grant aren’t bound by style. Aside from the fly hand-me-downs from our next-door neighbors in the projects that I received in the early 1980s (I was the last kid on the block wearing bell bottoms, and it wasn’t because I couldn’t let go of disco), we never got fashionable clothes like parachute pants or even polo shirts. I have been wearing jeans and sweatshirts or t-shirts for the duration. Actually, I guess some of the sweatshirts are actually approaching twenty years old themselves. But never mind.

So at least in my mind, when I look back at older pictures, I think I look like that now. Except the face, maybe. Also the fact that I was finally able to gain weight and grow into a man’s body instead of a spindly boy’s.

The women in these pictures are about to turn seventy. Which doesn’t seem old, now. But I go to church, so most of the women and men that I see regularly tend to be pretty vital and involved. I hope they still are. I hope I will still be.