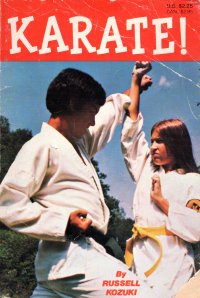 This book was previously published as Karate for Young People, and if I had read the back of the book when I picked it up in August 2019 at ABC Books, I would have seen that the book describes itself as being for all young people between 10 and 17. Maybe I did. I am not sure it would have dissuaded me. I certainly do pick up the martial arts books for young people at ABC Books. But not the ones for old people. I assume that’s the market for the tai chi walking books that are piling up because I’m not buying them.

At any rate, this is a very cheap paperback–almost pulp magazine quality more than a book–which offers a list of the basics of karate. Stances, strikes, kicks, blocks, and sparring. The techniques are shown with a series of three or four pictures, each of which takes up most of a page with a paragraph of explanation. The photos are not as helpful as the ones in Boxer’s Start-Up, but that books pictures and diagrams in that book really set a high bar. This volume has a couple instructive ones.

As I have said before, these books really serve to supplement an actual class since the motions are hard to learn from mere pictures. I mostly read them to draw comparisons with the martial arts class that I study. Some of the main differences that I see are that the karate ready positions tend to have a more closed stance (hips are aligned toward the opponent) and the hands are lower. But I’ve seen many of these forms already, but not lately–as I’ve mentioned, the school has focused a lot on boxing over the last couple of years.

But, still, there’s something to learn. One combination strike is called the U-punch, which is thrown from a front stance (which my school has never emphasized) and involves a cross and a backwards uppercut. It reminds me of my Matador combination, which is a knifehand toward the head from the forward hand with a low cross coming under it almost simultaneously. Although I haven’t really sparred in over a year with the way things have gone, this was one of my favorites. But, again, we’re not focusing on tae kwon do strikes these days.

So a good review over a couple of hours where I wasn’t at the dojo. Which I haven’t been much the last two weeks with the weather and whatnot. I need to get back so that I don’t fall further behind and I can wear my business gi again sometime.