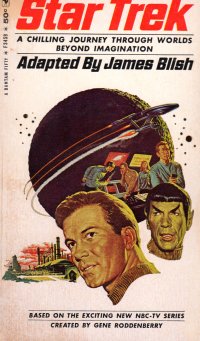 As you might know, gentle reader, the original Star Trek series aired for only three seasons in the late 1960s, but it developed quite a following. After its cancellation, the IP owners had James Blish write the episodes as short stories collected in, what, a dozen paperbacks (The Star Trek cartoon was likewise written up in Star Trek Log books by Alan Dean Foster). Fans had to get by on these books, the early novels, and on the syndicated shows for what seemed like a long time, but it was really only a decade until Star Trek: The Motion Picture came out, and Star Trek: The Next Generation a couple years later. So it really wasn’t that long, but it seemed longer, most likely because it was, at least for me, the long, long years of youth.

I say “which is the one where” because if you’ve read this far, you’re probably a science fiction fan of a certain age, and you’ll recognize some of the episodes.

The book is a very quick read; it’s only 136 pages, and the stories are basically scripts put into paragraphs with a little dash of flavor to them.

Strangely enough, though, Blish must have been working with early scripts or didn’t read much outside of the scripts, as he calls Spock a Vulcanian throughout and once mentions the Enterprise landing on a planet (although that might have been a typo, or he meant one of the shuttlecraft).

I read a bunch of these a long, long time ago in a trailer park far, far away–I think I got the paperbacks from the volunteer-run Community Library–and I have picked up a number of the books (1-8 and 11) in recent years. I also have a number of the Alan Dean Foster books as well, and I think they’re all grouped in the stacks here at Nogglestead. I think I’ll dip into them as I run out of Executioner novels for those in-between-other-book books. They’re fast, and they’re enjoyable, and they’re a bit of a nostalgia blast for me. And they’re likely to make me buy original Star Trek episodes on videocassette when I next come across them.

I would say Everything old is new again, but I’m not feeling renewed.

But my son mentioned a news tidbit, International Space Station will hurtle to Earth in 2031— but it won’t hit you, to me the other day, and I said, as Sarah Hoyt at Instapundit did, “Oh, you mean like Skylab?”

He had no idea what Skylab was. I guess it’s not on TikTok, and history began somewhere in the 21st century.

Eesh, although we try to educate the lads, they beat on, boats against the current, borne back carelessly into the the eternal present.