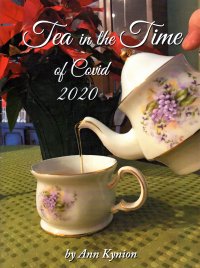 When I bought this book last June, I said I thought I would confuse it with Coffee Is Better Than Therapy. And so I did; as I was reading, I was picturing the woman living in Webster Groves, but then she would mention something from Springfield, and it would throw me off.

The book comes from a bit of a vanity project: It’s a book collecting 100 of her online posts during the first 100 days of the pandemic, which she counts from the lockdown order in Springfield in Spring 2020–although that’s a localized start date. I was skipping triathlon classes for weeks before that to limit my exposure to a disease I feared might be akin to something out of The Stand or The Andromeda Strain (books, gentle reader, books–although I have seen a contagion movie before, but not Contagion, I can’t think of what it would have been). In my paranoid defense, I’d like to point out I thought about cancelling a trip to DisneyWorld during the Ebola outbreak in, what, 2014? That experience–my own fears not coming to pass–mitigated my fears about Wuhan flu as time went by and the dead were only lying in the streets in pictures on the Internet and not in Springfield, Missouri.

So we have 100 entries of a couple paragraphs, more or less, talking a little bit about what she did that day, the tea mug that she used (she collects hand-crafted tea mugs from around the world), the little aphorism or proverb on her tea bag, and maybe a little bit of something else. Most of them cross some of the Country Grandmother/Rural Reporter column from small-town newsletters. They give a little insight into the mindset in early 2020 about the state of the disease and the government responses to it. I think Ms. Kynion continued believing in its potency and virulence longer than I did–after all, I was out in person several times a week going to essential businesses to keep things topped up even though I’d laid some things up before the lockdowns, and I saw the same checkers week after week meaning that they were not dying of a plague.

At any rate, an interesting project and a bit of a time capsule, but not something to read straight through as many of the entries cover the same ground and very similarly. It took me months to read it, as I would read a bunch of them and put it aside for a while. Also, I think it got lost in the truck for a while after I took it out to read elsewhere at one point.

Perhaps pace one’s self to a couple a day to better mimic the daily updates that each entry represents.