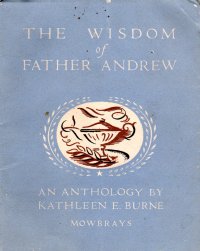 I must have gotten this pamphlet tucked into a pack of chapbooks bought from the Friends of the Springfield-Greene County. It is a mid-(twentieth)-century pamphlet, apparently one of six in the set, from Britain collecting the wisdom of Father Andrew, real name Henry Ernest Hardy, one of the founders of the Society of Divine Compassion, an organization dealing with the poor in London.

This 32-page book has a bunch of paragraph or two snippets from Father Andrew’s other works, presumably. A number of them deal with focusing on one’s work as a vocation, not merely a job, but doing work for God no matter what the work is. So it reminded me a bit of C.S. Lewis’s work blended with Buddhism, perhaps. It’s definitely Christian work, though, as Father Andrew wants you to live like Christ. Father Andrew died in 1946, so this book and its brethren are posthumous.

More interesting, though, is the provenance of the book. Kathleen E. Burne was apparently a female poet of the World War I era (just like Joyce Kilmer!), but if you search for her now, you find some mention of her books of the life of Father Andrew (you can find Prayers from Father Andrew online here). The booklet I have is a second impression from 1950, and in the intervening fifty seventy years, it’s made its way across the ocean and into the interior of another continent (not as quickly as Five Themes of Today, but still).

Imagine a tract in the little plastic holder in the front of your church in the hands of someone in another country in 2095. Hard to imagine, ainna? And yet, my beautiful wife’s current Portals of Prayer might go far. If we did not recycle them at the end of every month. I think that might be a bit of a difference: Ephemera like that, and current Reader’s Digests that we read, we discard–unlike people in the last century, and certainly not like people in mid-century Britain would have.