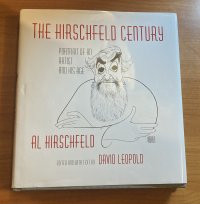 As I mentioned, I own an original Hirschfeld. A Matt Hirschfeld, Al Hirschfeld’s considerably younger second cousin also from St. Louis. So when I saw this book at ABC Books, I had to have it. Well, I had to have it because I’d run out of monographs to browse during football, and I didn’t make it into the Better Books section of the Fall 2021 Friends of the Library book sale (where the Art section is). So I paid $15 for this book instead of two or three. Also, note that the art monograph section of ABC Books is getting pretty thin these days as the Martial Arts section is. Make of that what you will.

This is a 300+ page comprehensive review of Al Hirschfeld’s work including a biography and plenty of images. Hirschfeld had plenty of biography–he started drawing in the 1920s and lived into the 21st century, so he had a lot of ground to cover. He worked mostly with entertainment subjects, starting with plays but also moving into movies and then television, and he made a really good living at it. To make a short story long, that’s it. His style evolved a bit, as he sought to really condense shape and movement into the fewest lines possible, so while he was never really as busy as the old timey illustrations you find in classic literature or, say, the children’s works illustrations by Mercer Mayer, Arnold Lobel, or Maurice Sendak, by the end of his career, his works are very sparse indeed. To ill effect, I might add. And although I could recognize some of the notables he illustrated, the captions helped a lot–not only because the personages might have peaked decades before I was born–well, mostly because of that.

So an interesting perusal–a bit text heavy for pure gridiron browsing, I had to take this one to the chair to complete it. As I mentioned, it’s as much a biography as a monograph. But worth my time, and yours, too, if you’re into pop art from the 20th century.