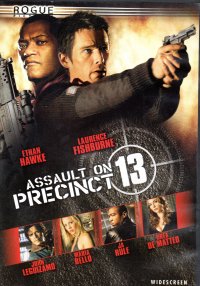 Well, apparently I went on an Ethan Hawke streak after my Andie MacDowell streak (MultiplicityFour Weddings and a Funeral). I watched this film not long after Reality Bites, so I got more Ethan Hawke in one week than most people. And I lived to tell the tale.

This film is a remake of an older film (from 1976). I am pretty sure I saw the older film a long time ago, but I got it confused with Fort Apache, The Bronx, a Paul Newman film that I found in my video library pretty easily, accidentally even while dusting this weekend. I’m not sure I have the older Assault on Precinct 13 on physical media, but one never knows. My video library is in worse disorder than my books.

So: It’s New Year’s Eve, and the police department of Detroit (not LA, as in the original) is decommissioning a station house. Everything has been moved out, almost, since the new precinct house opens on January 1, but a couple of police officers have to maintain presence until midnight. Ethan Hawke’s character once led a team of undercover detectives working narcotics, but after a bust gone bad that left his team dead and he wounded, he ended up with a desk job. Brian Dennehy is the guy retiring. Drea de Matteo is another cop. Maria Bello plays the Mary Ellen Trainor role, the police psychiatrist treating Ethan Hawke’s character. Originally not supposed to be at the station, her car has trouble outside as a Storm of the Century is brewing. A local crime lord, played by Larry Fishbourne and named Bishop for the irony (not just in being named for an ecclesiastical office, but the lead police officer in the original film was named Bishop) is getting transferred before trial, but the sheriff’s bus has to find a port in the storm, so it brings its load of prisoners to the soon-to-be closed, nearly empty police station for the storm to abate. And the people trying to silence Bishop can attack with impunity.

So it’s a bit of a castle defense movie–the cast arm themselves with whatever sidearms they have and whatever they can pick up on assailants. The attacks come in waves, each getting repulsed, but numerous name stars die. The head of the precinct releases and arms the prisoners to help with the defense. Someone inside the building is a traitor! And a handful of people, including the top cop and the top bad guy, who is not only a bad guy but also speaks witha Buddha-like wisdom. You know, kinda like Morpheus.

The film is updated from the 1976 version: It’s set in Detroit, which allows them to set it during a Great Blizzard which, in all honesty looks like a few flakes. I mean, there’s like two inches of snow on the ground, max. But it’s a big deal and cars are sliding off the road, it’s too dangerous to travel, but, hey, watch this sniper climb to the peak of a snow-covered roof and run across it like it’s nothing. Also, instead of gangs, the armed assailants are crooked cops who fear Bishop will testify against them in his trial. So it’s updated to a more modern feel, yeah–reading the Wikipedia entry for the original, one can sense the 70s zeitgeist–the sort of washed out colors, the looming threat of unchecked crime and lawlessness and decay, where the antagonists are criminals and not cops. Of course, if the film were made now, it would be unvaccinated white supremecists shambling toward the precinct, and all the police inside would be social workers who would somehow prevail.

Not a bad actioner, and not a lot of Message in it, which was nice.