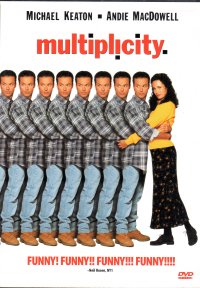 You’re right, gentle reader; I am watching a lot of films lately. In the olden days, I only got to watch a film or two every couple of months. The exception was VBS week, when I could watch one or two films every night for five nights. This summer, though, my beautiful wife has taken our boys to an amusement park once or twice a week (wearing out season passes) which gives me a chance to watch one or more. In addition to VBS week, where they volunteered as my boys have aged out of the program itself (already?) Also, I’m watching a film or so a week with my boys. So I am getting so many films in that I’ll want to take a break sometime and, I don’t know, read a book. Likely a book based on a television program or a movie.

Some blog I read mentioned Multiplicity recently, so I watched it on an evening when I was looking for a comedy to fill the VBS time. The film is from 1996, but it’s a bit of a throwback to 1980s comedies (and some shades of Mr. Mom). Michael Keaton plays Doug Kinney, a man burning his candle at both ends and the middle–he’s got a taxing job, and he’s trying to keep up with his wife and children and perhaps some hobbies. While supervising a job at a research facility, he encounters a man who offers to create a clone so that Michael Keaton can share duties with him. So he does; the clone gets to handle all the work part of Kinney’s life. He finds that his family life is also taking up a lot of time, leaving him no time for golf, so he creates another clone for homemaking. The first clone then creates a clone of himself, but it turns out to be simple-minded–a bad copy of a copy. So the three clones, each with a different personality aspect of the original, have some lojinks–adventures not up to hijinks as Kinney reflects upon his life. He takes some time to learn to sail and then takes a day to sail to Catalina Island on a boat with Bill Murray’s brother and the love interest from Happy Gilmore; during that time away, his wife (Andie MacDowell, aka Rita from Groundhog Day) rekindles her romance with her husband. Or his clones, successively (not all at once).

Yeah, that last bit kind of squicked me out a bit.

So it’s amusing at times; it’s not a laugh-out-loud funny film, but it’s a comedy for grownups. According to Wikipedia, it only made about half of its budget back at the box office, so clearly, adult comedies would be a no-go in the 21st century.

So I’m happy to have seen it to hopefully retain something from it for trivia nights, should they ever again happen.