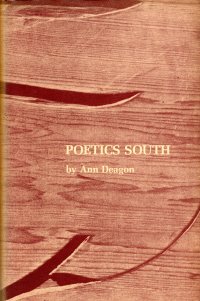 I got this book at the spring Friends of the Library book sale, and when I was looking for a volume of poetry to read (aside from the complete works of Keats, Shelley, and Marvell that I have read a couple of and put aside as well as a couple other collections), I picked it up because this was the first of my recent purchases I’ve found.

The poet is in her middle age in 1974; she talks about getting laid in 1947, so that makes her my grandmother’s age. So although I don’t generally mind poems about sex–I mean, I’ve written one or two of my own–the thought of a grandmother writing about oral sex made it kind of squicky.

The poems are all right; a step above true grandmother poetry. I know, I know, you can’t wait for me to tell you how long the lines are: Well, she has some shorter-lined poems and some that are sentency length in longer narrative poems (not Childe Harolde or even “The Love Song of J. Alfred Prufrock” length–just a couple of pages). Unfortunately, the poems are written for the page and not the mouth, so they lack the alliteration, rhythm, and word play that make a good spoken poem. And I try to speak all the poems I read, sometimes out loud and sometimes only in my head, but I do. Blame it on being raised by Nuyorican street poets, at least in my performative years.

The author has won numerous prizes, the back flap tells us. My first Internet look for her did not come up with a lot of information, but a search this morning showed that she published numerous books and won prizes as late as 2015. So she must have some regional recognition. So perhaps I’ll bump into something else she’s written sometime, but given her nexus is the northern southeast, perhaps not.