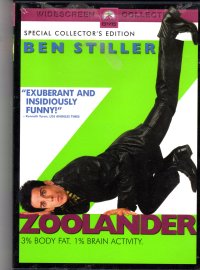 I watched this film with my boys because my youngest son has in the last couple of years decided that he will not smile for photographs. If you take a photo of him, he generally puts on a duckface pout, and I am wont to say, “Magnum! Dear God, it’s beautiful!” Which, as you know, conflates a couple of quotes from this film. So I wanted to share that source of that thing Dad always says with my boys.

This 2001 film is a full-length feature from a character Stiller had done of a dim-witted male model. In it, Zoolander, the title character played by Ben Stiller, has gotten a little stale being atop the modeling industry for so long. The Top Male Model three years in a row, he loses his chance at a fourth when a fresh face–Hansel, played by Owen Wilson, takes the modeling world by storm, leading Zoolander to question who he is and flirt with the idea of retirement. At the same time, an international fashion/clothing cartel wants to assassinate the new prime minister of Malaysia whose labor law reforms are killing their profits. The cartel has historically used brainwashed male models for hits, so they select Zoolander for the job and easily brainwash him. Meanwhile, an intrepid reporter played by Christina Taylor (Mrs. Ben Stiller) is investigating the cartel and becomes a target for their prime henchperson (Milla Jovavich, pronounced…. well, I don’t know).

So amusing enough; one of the Ben Stillerverse comedies, those collection of films with Ben Stiller, one or more Wilsons, Christine Taylor, and their friends that filled the middle 90s to the early part of the twenty-first century. Maybe they’re still ongoing but on a streaming service, so they’re invisible to me. I was explaining to the boys that there were two axis of comedy in this period, the Sandlerverse and the Stillerverse, movies that shared a lot of the same actors but rarely crossed over. I guess that’s not true–I tried to think of when they did, such as The Wedding Singer which had Christina Taylor in a supporting role, but I guess Ben Stiller was in Happy Gilmore, so it would be pointless to retcon some rivalry.

So, a good enough film–I’ve watched it several times, including seeing it in the theater and buying the DVD at full price at some time in the past. I often quote several lines from it, most often, “I feel like I’m taking crazy pills!” Which means that these films with the boys is like a real life version of the The Source of That Thing Daddy Always Says.

I guess they made a sequel in 2016 or thereabouts, fifteen years after the original. As with the similarly retread Anchorman 2, I will not seek this out as I think the lightning was not captured a second time. Didn’t you watch Hot Tub Time Machine 2, Brian J.? you ask. Shut up, Ted, I answer.

Also, in researching this post, I cannot help note that the Wikipedia entry retcons contemporary political labels to assign political affiliation to the good guys and bad guys:

In the film, top people in the fashion industry, Jacobim Mugatu (Will Ferrell) and Derek’s agent Maury Ballstein (Jerry Stiller), are hired by other executives to assassinate the Prime Minister of Malaysia (Woodrow Asai), who will pass progressive laws that would harm their businesses.

In 2001, progressive was not yet the contemporary term for good guys/left. And anyone who pays attention knows the fashion moguls are not Republicans. However, I fear modern audiences might have the mental acuity of a male model, subject to TikTokian bite-sized information brainwashing. But that’s just me.