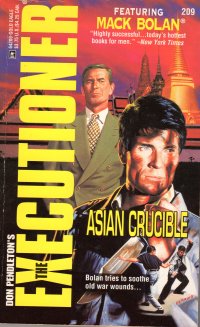 I read this book on my recent little getaway with my beautiful wife. Well, okay, like all the books I read on the trip, I started reading it at home, but I finished it on the trip, okay? As I was about a chapter or two from completion, it was the first I finished but the last I reported on. And in the intervening days, I almost forgot what it was about except Mack Bolan doing Mack Bolan things.

But, you know what, I remember it: secret forces in the U.S. government are hoping to start a second Vietnam war by faking the return of a military man held POW for twenty-five years and by faking up some border incidents with Laos and Thailand. Bolan goes to Thailand to investigate and discovers rogue elements of the CIA are working with a Chinese Triad involved in drug smuggling to get the war started.

Not a bad book; one might say it has elements of First Blood Part II blended with a bit of Air America.

Recognizing the influences isn’t a bad thing once one knows that creative works have borrowed, homaged, and ripped off other works forever. It’s only since the RIAAfication and Disneyfication of copyright laws in the United States that it’s gotten risky.

So how many do I have left? Not many in the originals of the series; I might push on to finish those titles this year, safe in the comfort that ABC Books has more. Kind of like the false security I had about Hooked on Books having a huge selection of John D. MacDonald paperbacks. They did, until they no longer did.