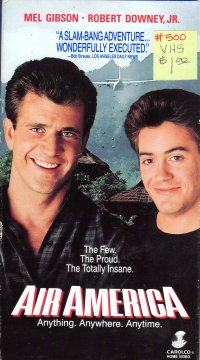 Well, this should have been a blockbuster, ainna? A young Mel Gibson in his heyday, a young Robert Downey, Junior, version 1.0 fresh from the Brat Pack days. A buddy film set, part comedy and part adventure, with corrupt government officials as the bad guys, flying action scenes and stunts, and….

The plot is that a helicopter traffic reporter (Downey) loses his job and gets his license to fly revoked stateside, but a secret government agency recruits him to join an outfit in Laos that flies and drops supplies to various locations in southeast Asia, from guns to friendlies and aid to outlying villages. He meets the crazy pilots who are already in country, who do the flights by day and party really heartily at night. One (Gibson) takes the new pilot under his wing, and the new guy learns that the old hand is amassing arms to sell to finance his retirement. After Downey and another pilot crash, the local warlord, an ally of the leaders of their outfit, rescue some “flour” and leave the fliers stranded. So Downey plans his revenge on the local opium processing plant, which involves setting up a couple of grenades–but it only throttles production for a little bit and kicks up a hornets’ nest of revenge. Subplots involve a senator (Lane Smith, last seen in My Cousin Vinny) on a fact-finding mission looking for evidence of drug smuggling and an American aid worker working with refugees whose underdeveloped storyline only exists to provide a redemption story for Gibson’s character (the refugee camp is located in poppy fields that rival factions converge on to harvest).

It’s hard to say why it doesn’t really work. The pacing? Are the characters just outside the relatable range? Is the pacing a little slow? Is the main problem or conflict under-defined so we don’t really know what’s at stack until the middle or end of the movie? I mean, Gibson and Downey should be at the height of their charisma, but it’s kind of wasted. A script that is not sure how buddy it is or how serious it is with a message? Probably all of these things.

So it will go into the library and not represent something I watch over and over again, but I guess it’s good for completeness’ sake in the ouevres of Gibson and Downey.