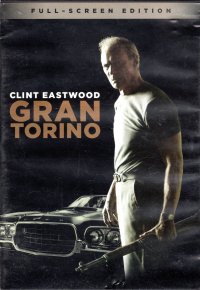 You know, gentle reader, I am so old now that I think of things from long ago as recent–so I think of this as a recent Clint Eastwood movie, perhaps because it’s from the 21st century, and Eastwood’s filmography goes way back. But he has been making and acting in films up to the present day (I posted a Toby Keith song with clips from the really recent movie The Mule here, although it’s only really recent now–if you’re reading it seven years from now, maybe not recent any more).

At any rate, I will explain the plot for those of you who are later to the 21st century movies than I am. Eastwood plays a recently widowed Korean War veteran whose Detroit neighborhood has changed around him. It’s become a bit dangerous, and Hmong immigrants have moved in, including next door. The first scenes deal with his wife’s funeral and its aftermath, including Walt (Eastwood) watching his children and grandchildren’s behavior at the funeral and the cold cuts at his home after. The priest of the parish church wants to look after Walt as the priest promised the late wife that he would, but Walt rebuffs him.

A local gang tries to initiate the teenaged son of the next door neighbors by having him steal Walt’s pristine Gran Torino, but Walt prevents it. To atone, the Hmong neighbors offer the boy as a worker to help work off his offense; Walt doesn’t think much of it and tries to rebuff this gesture, but then takes the boy on, tasking him with helping to clean up and repair houses in the neighborhood, which makes Walt a little more popular with the new neighbors and introduces him to them. Walt takes on mentoring the young man and protecting him from the gang with escalating violence which leads to the ultimate violent conclusion.

The ultimate conclusion is more messianic and Christ-like than one would expect from an Eastwood picture, but, c’mon, man, he’s getting up there by the time this film comes out. He does not protect the young Hmong girl–she gets Sandra Locked–and he does not kill the offenders, but he sets himself up to get shot by them in front of too many witnesses to intimidate, so the Hmong family is ultimately protected. And although his family is eager to reap his legacy, especially the Gran Torino, he leaves it to the Hmong young man.

Of course, the movie foreshadowed from a very early point that Walt was sick and maybe dying, so his sacrifice makes a bit of sense. After he learns he’s sick, he tries to reconnect a bit with his son, but the son puts him off. Which is sad, but not unlikely.

Still, it’s a good study of a person who has seen a lot and who comes off as gruff (speaking as one called gruff myself recently, I can relate), but who has, at the core, a sense of right and wrong–the code, if you will–who sees the world fragmenting and falling apart around him, leaving him behind and maybe even maltreating him as it does.

Even in 2008, the right thinkers hated the character, but he was relatable then. And now. Maybe mostly by people like me who feel the same way. The kind of people that made the Archie Bunker and Ron Swanson characters popular in their turn. And who don’t really have one to look up to in modern movies or television. Which is why they, and by “they,” I clearly mean “I,” watch old movies on physical media.