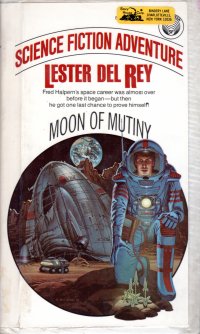 When I bought this book in May, I said I might loan it to my youngest who is reading dystopian YA fiction these days. I offered it, but he demurred. So I took this on my recent trip and read it quite early in the vacation.

At any rate, this is young rocket jockey fiction from the 1960s that was still in print in my formative years and filled the library shelves of my middle school. A young man notorious for stealing a rocket and joyriding to the moon and requiring rescue washes out of rocket flight school and returns to the space station where he was raised by a distant father. He’s at loose ends at the station, where everyone has a job to do but him, but he gets a chance to go on an underfunded mission to the moon as a junior pilot, where his piloting skill and unnaturally good mental ability to calculate trajectories comes in handy. But he gets a reputation for being bad luck as difficulties befall the scientific survey team he’s on, and he mutinies when another space ship, a prototype fast rocket, crashes somewhere other than the computers calculated it would–and he gets the chance to save the very instructor who opposed him in the rocket academy.

The narrative is a collection of scenes more than a truly cohesive narrative–the climactic problem really does not arise until the end of the book–with a bunch of neat-o speculative science fiction things and explanations as to how they work to keep the mid-20th century boys interested and maybe thinking about an engineering career. The book also addresses some social-political considerations of space flight and exploration, including the tenuous economics and support for space exploration/colonies and some logistical challenges therein.

So it’s young adult fiction, but the young adults from sixty and seventy years ago–and just forty years ago when these books remained on school shelves–must have been a bit more educated than they are today. But, of course, this being an old-timey blog and not a TikTok, you already expected that kind of messaging, ainna?

Del Rey is a cut below the Heinlein or the Asimov, but still good enough for a quick read.