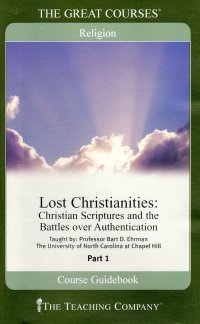 I listened to Professor Ehrman’s The History of the Bible: The Making of the New Testament Canon in 2019.

This series of lectures takes a bit of a different focus: It looks at some of the variant Christian churches in the early centuries of the church, the first and second centuries AD, right after the gospels and Pauline letters were written. Many of these churches had different collections of books that they used as scripture, including some elements that made it into the New Testament canon and others relegated to apocrypha. The winnowing didn’t involve necessarily purging, inquisitions, and punishing heretics, although some of that was involved. But mostly this lecture focuses on the books themselves.

The lecture is structured a bit into introduction, identifying some large groups of churches aside from the proto-orthodox (which would eventually dominate and determine the canon), and then examining some of the apocryphoral books based on types (gospels, acts, epistles, apocalypses) and ending with a bit of how the proto-orthodox became The Church and set the canon–which might lead into the other lecture series.

When I listened to Buddhism, I marvelled at how disparate the strains of Buddhism were, especially in contrast to Christianity. One sees in this lecture series how disparate Christianity could have become without the centralizing influence of Rome on it. One wonders if Buddhism had arisen in one of the strong Chinese dynasties instead of India whether it would be more standard, or how Christianity might have evolved outside of the Mediterranean world of the Roman empire.

At any rate, I think I sharpened up some of my understanding of the gnostics, learned who the Ebionites were, and understand some of the source material for Medeival and Renaissance religious art lies outside of the Bible and in these, what, Further Adventures Of… Christian storybooks. However, if I were going to take a test on it, I would definitely have to study. I am learning the real limitations of listening to the audio courses–one that my uncle in Kansas City pointed out–that I don’t remember a whole lot from the lectures–just bits and pieces and cool stories therein. This set of lectures is fairly narrative and focused, so I hope I remember a bunch from it. But after I hit Publish on this report, unless I make an effort to bring it up elsewhere and in conversation, I probably will only retain about ten minutes of it including the Bradenberg Concerto fanfare that starts each lecture (this set is from before The Great Courses/Teaching Company changed the intro to a single chord).

Still, better than listening to the same Jack playlist on the radio all the time.