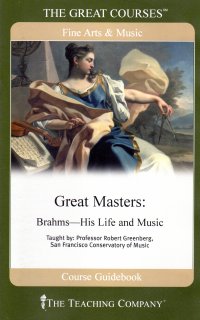 As you might remember, gentle reader, the stack of Teaching Company Great Courses I bought last September includes a number of shorter biography lecture series on classical musicians and composers. I have previously listened to (but not reported on) the series on Mozart. They’re all done by Professor Robert Greenberg, who also did the series How to Listen To and Understand Great Music which I started listening to a couple years ago with my beautiful wife. He’s probably my favorite of all the lecturers, and it’s probably indicative that when the Teaching Company used to send out sample discs, How to Listen to and Understand Great Music was one of the sample lectures.

The lectures in this line, the Great Masters / His Life and Music, are more biographies than musical analyses, but they do include snippets of various works or opuses (opi? opia?) to illustrate. They do put the composers in the context of musical trends and their relationships with other composers. For example, Brahms apparently hated Liszt and often Wagner.

Based on my two examples (Mozart and Brahms), I think I’ll start seeing some patterns. Both were the children of musical parents. However, instead of taking him on a European concert tour as a curiosity, Brahms’ parents made him work in brothels, where he was an object of curiosity and probably abuse which marred his relationship with women throughout his life. Later, he would become a celebrity for his music and would become a bit prickly or full of himself, and a bit of a rascal. Brahms certainly fit this mold.

I am not sure I completely grok the music as it is, though–I never did complete How to Listen to and Understand Great Music, remember–and I don’t hear the content of musical notes and structure as clearly as some in this family do. I mean, I am a words guy–I tend to think of the lyrics as the important part of a song and the music as supportive of those lyrics. However, if I steep myself in these courses, I am sure my appreciation will go up.

I have already started the course on Liszt because learning about Brahms’s enemy right after Brahms.

When I was in Kansas City last autumn, my uncle asked me what I learned from these courses (as opposed to watching documentary series on cable, which he and my aunt do). It’s generally more a sense I get than actual learning things. From this course, I will likely remember Brahms played in brothels, had unrequited relationships, sometimes on purpose, with many women, including Clara Schumann, and that he was compared early to Bach and Beethoven and that made him self-conscious, but that he eventually earned his place there. I will not likely remember the bits that Professor Greenberg flags as trivia–such as the third movement of the third symphony is the only Brahms piece using the triangle. Which is just as well. Twenty- and thirty-something people writing the questions for trivia nights don’t know that either. And quite likely might only know Brahms for his lullaby, actually called “The Cradle Song”.