Over at Ace of Spades HQ, my friend (I say because he’s pimped my books on the Sunday Morning Book Thread and has netted me more sales than an In The Mail mention on Instapundit) Oregon Muse has a feature every Monday, Wednesday, and Friday that includes memes and a little game called “Who Dis?” wherein you are to guess a male and a female celebrity and their connection.

I mean, in the 1980s, teenaged boys would not have made this mistake, but it is not the 1980s nor are we teenagers any more.

I mean, who didn’t have the Heather Thomas towel poster? 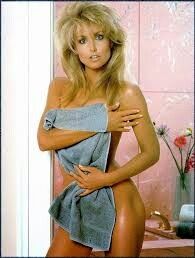 Well, I didn’t have it. I think my brother did.

I didn’t mention the error in the comments at AoSHQ (nor Heather Thomas’s connection to Lee Majors, which is the television program The Fall Guy) because I’m a lurker there who doesn’t comment. Also, I wanted to include pictures of who might be the second and third hottest Heathers ever. What, with the picture of Morena Bacarrin yesterday, it’s pretty clear that Musings from Brian J. is becoming one of those kinds of blogs. Perhaps I’ll even bother to send one or both of these posts to Wombat-Socho at The Other McCain for official Rule 5 post consideration. But probably not. I’m too lazy to comment and too lazy to linkwhore.