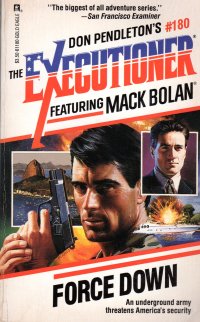 Brian J, you say, surely you’re not going to count an Executioner novel as your book set in another country? Well, gentle reader, time will tell: I have a little over a week to finish as many books in the Winter 2021 Reading Challenge categories as I can, and I have five slots left. So I might not have the chance to read something with more heft and depth for the In A Different Country slot.

And, truth be told, this book takes place in several different countries: The Executioner goes to Brazil to establish a relationship with counter-insurrgency agents as they raid a paramilitary group’s hideout to rescue a woman being held for ransom–willingly, as it turns out. Then he stops by Miami for a briefing, and then he’s off to Jamaica with a cross-national defense team to take on the paramilitary group’s beachhead there, and then he goes back to Brazil to take on the paramilitary group with the counter-insurgency agents, and then decapitate–or deliver the coup-de-grace–by eliminating the businessman behind the scenes. And, finis!.

The stop in Miami makes me wonder if I can truly, in good conscience, say this book took place in a foreign country. But ethics fall by the wayside when it comes to filling out my Winter 2021 Reading Challenge form.

As Executioner novels go, it has a lot of development in the first half to two-thirds of the book, which lead me to think maybe it was the beginning of another trilogy in the series, but no–about two thirds of the way through the book, it jumps into action set pieces and finishes quickly. Also, Bolan is a bit of a bystander through much of it compared to other adventures where he works solo. But it’s not a bad entry in the series.

I am down to 13 volumes in The Executioner series, not counting the Super Bolan books and related series. My goodness, what will I do without Executioner novels as the default for times when I need a book to read? It’s taken me ten years to read the 47 books my beautiful wife bought me for my birthday in 2011 and the others I have picked up since then. They’ve been a constant on my bookshelves almost since we moved to Nogglestead. So I will, someday, miss them.

But I probably won’t re-read them, unlike the Ed McBain and John D. MacDonald books that I come across again.