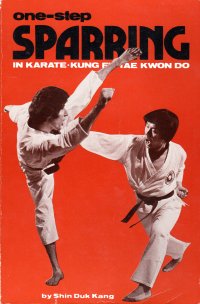 Strangely enough, I started this book before I read Boxer’s Start-Up (which means this does not count against Wuthering Heights‘s Bolan Number either). However, I put it down and on my chairside table to read towards the end and quite forgot about it for a bit. Enough to push it from the 2020 reading list to the 2021 reading list, which, combined with starting the Reading Year in the last week of the preceding year, explains how I have read four books already in 2021. Through government and corporate accounting rules.

At any rate, this book, as it indicates, includes a number of techniques and drills, kata even, for practicing sparring. It focuses a lot on tae kwon do style kicks, which means really pretty big kicks to the head or higher; my school teaches them, but the crescent kick is a sweeping front side kick where your leg comes up sideways and strikes with the instep, and although it’s a nice distraction–I use it to hide a second strike following it–it plays a large role in a lot of the drills and kata here.

As I have mentioned, these books are best for people who study the arts and want something to review when not in class. This book formerly belonged to a student at a martial arts school–he has written notes beside different techniques along when he should be proficient at them and minor variations (knife hand instead of a punch, for example).

So I didn’t get a lot out of it myself; I am familiar with many of the strikes, and as far as the sparring drills go, I’d have to have a partner to put them into effect–and my school has its own drills, so when I’m partnered up, I’m doing things my kyoshi has selected. I got bogged down in the last bit of it. The last section–60 of the books 140 pages, not quite half, is some thirty different kata that are attack/counterattack drills this are between six and ten sentences and six and nine photos of the two-person kata. So I set it down and might have forgotten about it except I finished an Executioner novel and did not want to pick up Wuthering Heights again right before bed–and I rediscovered this book instead.

So it was probably more worthwhile for the preceding owner. Who might well have been studying martial arts even before The Karate Kid, if you can imagine such a thing.