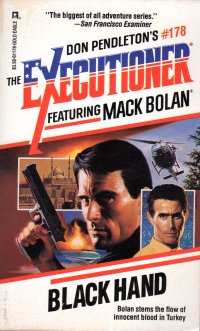 Well, gentle reader, I now have a new metric for Classical literature. Out: The Anna Karenina moment where I’m reading a long piece of literature and determine I could have read a whole other book by that point. The new metric is the Bolan number: The number of Mack Bolan or other paperbacks that I read while reading another piece of literature. This is the first Bolan book that I’ve read while going through Wuthering Heights, and Wuthering Heights will have a Bolan Number greater than 1.

But we’re not here to talk about Wuthering Heights; we’re here to talk about Black Hand, a novel that finds Bolan in Turkey after an attack on the American embassy that is laughably underguarded ten years after Beirut. He teams with a director of counter-terrorism and then an attractive sub-director of terrorism to free some hostages and smash the terrorist group, which is five people. Well, clearly, a diminishing number of people once Bolan gets involved, but they certainly seem to punch above their weight.

So it’s not one of the better entries in the series. One incident in the book that I read out loud to my poor long-suffering but beautiful wife was when a terrorist invaded a hospital to kill the anti-terrorism director. He bypasses a supply closet, shoots a surgeon in the head while the surgeon is in a break room, hides the body, and puts on the surgeon’s white coat as a disguise. Except why hide the body after making a mess in the break room? And just how white is the lab coat going to be after that gunshot luridly removes the surgeon’s head?

Yeah, not one of the best entries in the series, but it helped get me through another couple chapters of Wuthering Heights.