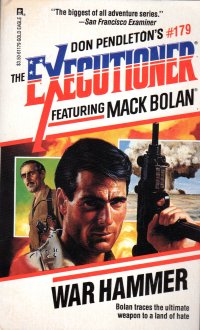 This book, read a couple days after Black Hand, brings Wuthering Heights‘s Bolan Number up to 2 the easy way.

This book is a better entry in the series–better than Black Hand anyway. In it, Bolan is on the trail of stolen nuclear triggers that are on their way from California to Iraq (which has just restarted its nuclear program after the first Gulf War). So set pieces include a couple shootouts in California, the Irish coast, and Iraq after getting smuggled in via Turkey.

At any rate, the author clearly has read some of the other Executioner novels at least–he blends some Bolan philosophizing sections into the story and uses similar phrases like “numbers running down” that undoubtedly are mentioned in the outlines of the books given to the house authors but some handle them more deftly than others. The tactics and firing Uzis from the hip to great effect are more informed by watching movies than, I don’t know, serving in the military or firing an actual gun–much less playing realistic military games from the 21st century. As I’ve not done two of those three, I am an armchair novel writer when I criticise that, I know, but still.

A quick read, and then back to the moors of Scotland briefly.