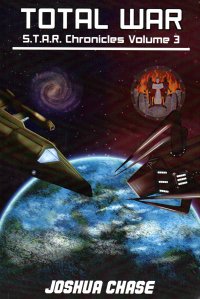 Well, I have completed the first three books in the series, which I bought in 2017. He’s got at least one more out, and I’ll probably pick the others up the next time I see Chase at a convention. And by “the next time,” I mean “if ever again,” but I hope I do.

Let’s see, in this one, the Empire and the Confederacy are stalemating a bit. The Confederacy has some alien tech that gives them a bit of an advantage; some systems align with the Empire, and some with the Confederacy. And the military leader for the Empire starts laying the groundwork for a coup when the current emperor orders the slaughter of civilians in retaliation for a Confederate victory. Then the aliens whom humanity slaughtered hundreds of years ago–the ones that left behind the advanced technology return, and they’re pissed.

The book runs a little longer than the previous ones–180 pages versus under 140–and Chase is still good at plotting, and the book moves along at a quick pace, but he’s also really starting to develop as a writer with some more polished descriptions added and some characterization to the story. So he’s improved as a writer since his first book eight years ago to this book which is four years old.