Last night, whilst grilling, I was pleased to go outside and see a bright star in the sky. 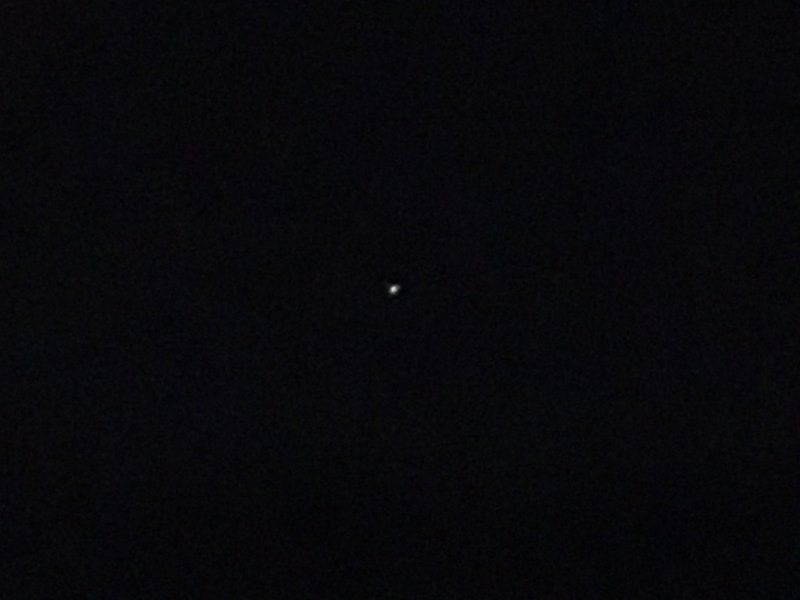 I got out my binoculars and took a look; yes, it was indeed two planets so close together that they looked like a single unit to the naked eye. I don’t have a tripod for my phone, unlike the artist formerly known as the One Hand Clapping Guy. So you get a dot, kind of like I saw.

My oldest saw me taking the binoculars out to the driveway, so he followed; he thought it was cool, so he told his brother, whom I then took out on the deck for a peek. I even coaxed my beautiful wife out to take a peek. They all thought it was neat, and then they went back to their other [electronic] endeavors.

You know, when I was in middle school, I was all down with astronomy. One of my father’s childhood books, a volume on astronomy, passed down to me, and I checked other books out of the library to read up on astronomy as it was understood in the 1960s. I lay on my back on my aunt’s yard in St. Charles and tried to draw a sky chart. I was very in tune with the position of the planets daily–but that came with the help of the St. Louis Post-Dispatch, which posted that information along with the daily weather report. But when 1986 rolled around, and we were living in the well-lit trailer park when Halley’s Comet came around. I might have seen it. I saw a smudge in the morning sky where the paper said it should be.

About that time, my interest in astronomy waned, which is just as well. I lived in well-lit areas after that. Even the house down the gravel road had close neighbors on either side with lights in their back yards and on their chicken coop, and I had a massive hill immediately for my western horizon.

Still, I thought the night was very dark when I moved to Nogglestead, but the horizons are shrinking with light from new developments and growing towns to the east and west. But I have, when I have thought of it and when news coverage prompted me, to go try to see a meteor shower or whatnot. I might have actually seen a meteor once a couple years back, but it was blink-and-it’s-gone, so I’m not sure.

So I was surprised and mutely delighted to actually see an astronomical phenomenon. One that Genghis Khan might have thought was a good omen. I’d like to try to treat it as such, but I am all-too-familiar with the Bayeux Tapestry.