So, gentle reader, as you might know, I am light on the work hours currently, which means that I get the chance to go to the gym a couple of mornings a week. Which would be great, and I would love to do an AoSHQ GAINZZZZ thread extolling my accomplishments there, but, really, all I know is that everyone is all of sudden a Gladys.

I guess it came to mind a couple of days ago when a post showed up in my Facebook Memories: 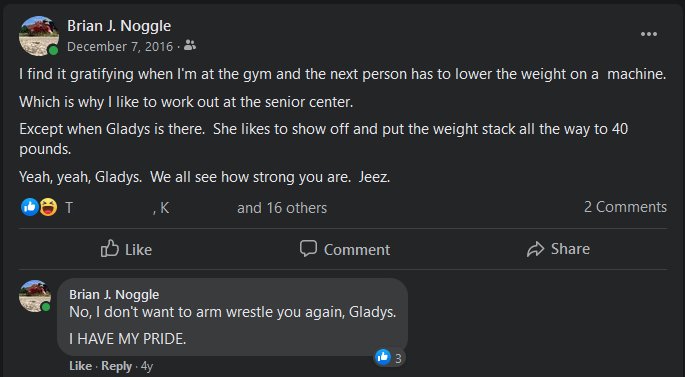 So as I am slowly working my way back into some shape (probably a rhombus), I’m suddenly confronted with the whole world of Gladyses.

A super-fit gran and granddaughter have joined forces to demonstrate a killer workout routine.

The gran, from Australia, has over 34,900 followers on Instagram where she shows off her incredible physique to adoring followers.

Recently, the bodybuilder shared a workout clip with her granddaughter Tia which left people in awe over their jaw-dropping gains.

Some couldn’t tell the difference between Lesley and Tia – asking the grandmother what she eats to stay in such amazing shape.

And there’s that one guy talking about how diets can fail:

The first thing you’re always told when starting out on any kind of “self-improvement” is to set goals. Which works in the short term, since “getting in shape” is too amorphous to be useful, but “losing ten pounds” or “being able to run 2 miles in under 17 minutes” are measurable, therefore (seemingly) achievable. It’s the daily progress that keeps you going – you can always shave a few seconds off your jog time, so you’re always achieving something.

The problem, though, is that this isn’t sustainable.

2 miles at seven and a half minutes per? Yeah, that ship has probably sailed for me. My best 5K was a shade under 28 minutes several years ago. I’m currently happy with a ten minute mile and a thirty minute 5K. True, I’m not running many of them these days, and my triathlon training is mostly about survival, but I am pretty sure I won’t get to seven and a half minutes a mile. Ever. But who knows? If my current underemployment lasts (it won’t), I might start finishing my weightlifting at the YMCA with a run with an eye towards going faster. I tend to run on the treadmill so I can regulate my speed. Maybe I will turn it up. Or maybe I’ll use that time to stop by the doughnut shop on the way home.

I am still doing the martial arts, hopefully twice a week. The kid whom I have mentioned on this here blog before, the formerly teenaged kid who read weighty books, moved away but returned to go to college. He’s a paid part-time instructor now, and last night, he kept telling me I was doing very well with star jacks (basically, a jumping jack where your legs have to spread and come back together on the same jump) and jump 360 spin sidekicks. I can’t tell if he’s being encouraging because I was the only one in the adults and kids class who was doing the exercises seriously and properly, or if it was more of a bless your heart, old man! thing.

Meanwhile, the super-fit young man from martial arts who has now grown into a personal trainer (he’s not the only kid there who did) posted a video of him doing an impossible/magic push-up.

This is not his video; it’s the video I watched to learn how to do it.

Because everything I see him do, I have to try. He works out at the Y, too, so I see a lot.

Before you ask, I didn’t quite do an impossible pushup myself because I worked my chest yesterday; I am hopeful I can eke out one on an escrima stick sometime just so I can say I’ve done it. No tornado push-ups yet, though. You know, a few years ago, I could convince myself that I was almost keeping up with the young man during the exercise portions of the class. Again, that was years ago, and my exercise has been intermittent since then.

So this is not so much a GAINZZZ post; I am currently not in GAINZZZZ mode or mindset. I’m in the mindset that if I don’t keep doing it today, I won’t be able to do it at all tomorrow, much less faster or better.