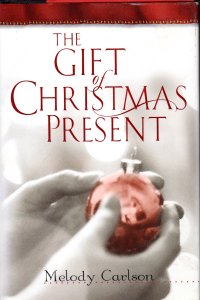 I have a confession to make: Despite the fact that I have bought several years’ worth of Christmas novels at book sales past, when Christmas time closes in, I can’t find the Christmas books I already own (and this year, I am certain they are not by the Joshua Clark Chase books). So last Friday, I headed to the northern wastes of Springfield, where ABC Books is an oasis on the distant horizon to buy one such novel for this year. Ms. E. keeps her holdings in far better order than I do; although she did not have a special display of Christmas novels set up, I quickly found one in the extensive Christian Fiction section. I recognized the name Melody Carlson as I started to read it; her novel The Christmas Shoppe was the first Christmas novel I read in 2012, when it and I were young.

This book focuses on a college-aged adoptee whose natural mother died shortly after her birth and who was adopted by an older couple who befriended the natural mother who fled from her family for some reason. Although they look a little to try to find her family, it’s only now (sixteen years ago, so then already) that the young lady gets a lead on her birth grandmother in the very town where she is attending college. As she rings the doorbell, the embittered old woman thinks she is a housekeeper/caretaker she has hired because she has sprained her ankle. So the young lady does not correct the misinterpretation and hires on as a housekeeper/caretaker and grows close to the woman without revealing her secret. She tries to learn a little about her mother and why she left–apparently, she took preggers a couple weeks before her graduation and left after a row with her family about whether she should keep the baby or not.

About the midway point, she talks to her pastor and decides to tell her family–her grandmother, her step great aunt, her step-uncle and his family–which left me to wonder where the book was going to go after the big reveal. Welp, it had one family secret too far: You see, the adopted girl is the product of a union between the stepfather and the (of age) step-daughter. So the second half of the book is the family members coming to terms with this revelation. The book uses the word rape a lot, but neither of the participants are alive in the book to say whether it was really rape or just a drunken hookup. I read enough Agony Aunt things where that sort of thing happens to think it possible, but the book calls it rape, so let it be rape, I guess. As I said, that’s a family secret too far, and it makes for the most macabre Christmas romance I can think of (actually, there’s no romance in this book: no love interests for the grandmother or the granddaughter, wait, I mean stepdaughter, I mean, whatever she ended up being).

So, yeah, that might not have been the Christmas novel I was looking for.

As I’m listening to a lecture series on the English Novel, I can’t help compare this book to the themes found in traditional English novels. An orphan, a rich family, mistaken identity, a family secret, and at the very end, the revelation that the orphan is a blood relation inheritor. It reads a lot more modern than, say, Jane Austen, but one can easily see the influence of the typical, and generally much longer, classical English literature story arc.

Or at least I can, right now, because I’m listening to the lectures that I mentioned.

Of the two, I think I prefer the later work that I read earlier. I won’t dodge her Christmas books in the future. Likely because I won’t remember until I’m researching book reports on them that I’ve read her books before.