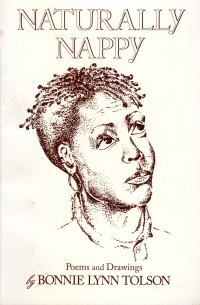 This book is dated 1992, and although it’s got a flat spine, it has a chapbook vibe to it, so I kind of think of Bonnie Lynn Tolson as a contemporary as those were my fruitful poetic years. The back cover says that she has written and performed many years, though, and I only got started in like 1993 with my performance days. The back cover also says she has a real job, too, and in 1992, I’m a ways off for anything like that. So she’s a little older than I am, and, well….

Most of the poems are built on lines of two or three words in a stream that flows down a full page. I can hear the poets like this reading-slash-performing poems of this type. A couple of words, a pondrous pause, a couple more words. With lines of just a couple words, you really can’t build up any performance rhythm or read images,

so we
just get
words of
blackness worth
something because
the poet
is black.

I mean, yeah. Most of the poetry is about being in the inner city, but it doesn’t take you there because it’s two words on a line, and maybe thirty to forty words in the poem, and that will not have much impact.

It’s not a race thing, it’s a poetry thing. I’ve seen a lot of poets who were young, who were old, who were in college, who might have been in college once, writing and performing this way and writing this way. But it’s not poetry. It’s the 20th century curse where expressing yourself trumps execution, where the canvas is more important than what it depicts.

I did flag a couple poems, “The Portrait of My Friend” and “Dancer”, which were a cut above the rest. I also flagged one called “Cha Cha” about what would then have been called a transvestite but now would be called transgender. I flagged the last because kids these days would not have believed anyone cared for the marginalized before they were born, and to point out that perhaps they’ve “won”? Time will tell.

At any rate, it doesn’t look as though Tolson went on to write much more. Also, although I thought I might have ordered this from ABC Books during the recent unpleasantness, it turns ought I bought this in that distant past of last November.