ABC Books had another book signing this weekend, so of course we went. Jovanna Schlossenberg, a children’s book author from Kansas City, was signing copies of her first book JoJo Knows RVs, and she was glad to tell me and my oldest son all about it. So I bought two copies: One for my boys and one for my niece’s son who is more within the target age.

I also picked up a couple books. Which is funny: I come up there specifically for the book signings, but I pick up a couple other books before I come back to the table with the author. To cover my true purpose. Also, because I like books. 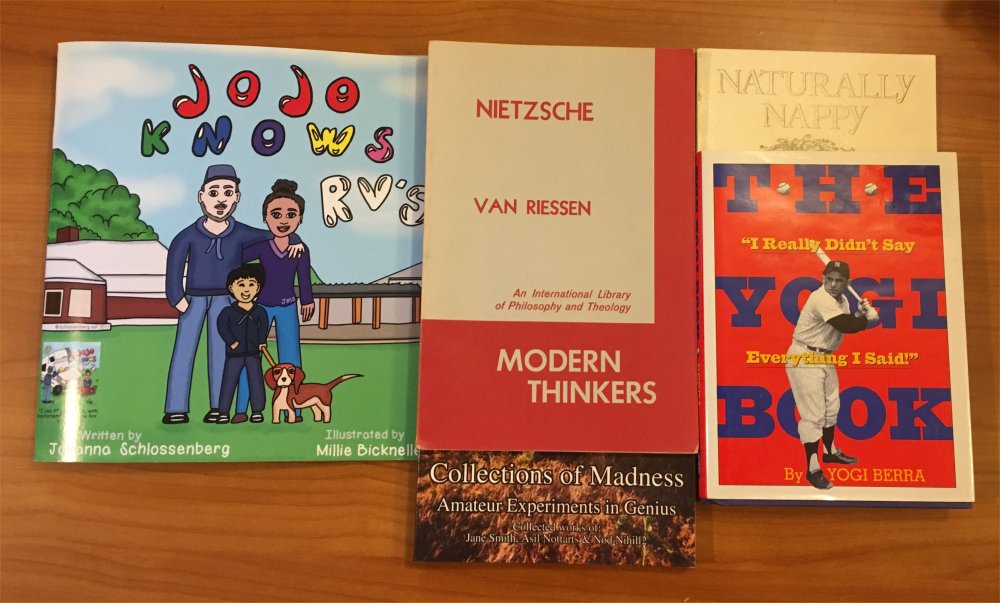 I got a couple volumes of poetry (Naturally Nappy by Bonnie Lynn Tolson and Collections of Madness by Jane Smith, Asil Nottarts, and Nod Nihin2). I got The Yogi Book by Yogi Berra because I was offended by a St. Louis Post-Distpatch story saying Max Scherzer replaced Berra as the best baseball player from St. Louis. I haven’t read a Yogi Berra book in two years. I also got a small survey book on Nietzsche from the Modern Thinkers series by Van Riessen.

I will probably read the poetry first but might bull through the Nietzsche book since it’s pretty small and not likely to be as dense as actual, you know, Nietzsche.

I also suffered from an awkward, and perhaps even rude, moment. Ms. Schlossenberg was very friendly, effusive, and she shook my hand first thing when I stopped by her table. I shook reflexively, but I remembered that I was coming fresh from a boxing-centric martial arts class, and my hands smelled like the inside of boxing gloves. I.E., nasty. So after she signed both books that I was buying, she extended her hand again, and I said that I didn’t want to shake her hand again. I tried to explain I’d just been boxing, but I’m a middle-aged (at least) man, so that might not have been very clear. So I’m afraid she might think I didn’t want to shake her hand because she was black or something.

Crazy, I know. But it’s the little kind of I didn’t mean it that way that will linger in my conscience in a slightly obsessive way.