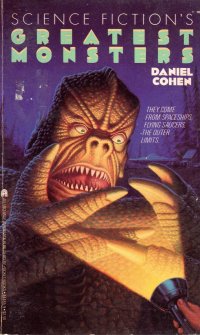 As I predicted when I got this book, I jumped on it quickly as an interlude between books in the Agatha Christie omnibus I’m reading. Also, as predicted, it’s a school book order kind of book, geared to youths in the late 1970s and early 1980s in elementary school who wanted to read about monsters and science fiction. Nerds, we were called in those days. The text looks to have been original in 1980 with an update in 1986, so I would have been a couple years too old to have ordered it from Tab, Arrow, or Scholastic. Now, of course, I’m very old indeed.

At any rate, the book groups monsters, mostly from cinema, into different groups: Alien invaders, aliens in space, robots/androids, horror monsters, and invisible monsters. It then touches on some of them from movies, as I said, from the 1940s to Return of the Jedi (an update to the original 1980 text, natch). It’s kind of a high level enumeration rather than any in-depth exploration, but it’s a kid’s thing, for crying out loud.

And although it touches upon giant insect movies from the 1950s and a couple of giant octopus/dinosaur movies, it does not really go into the Godzillaverse at all, which is odd, since those films were in heavy rotation on Saturday afternoons in the 1970s. Maybe that was only Milwaukee. But no name-checks of Rodan, Gamera, Mothra, or Mechazilla. So a clear oversight.

And the best thing is the very last section:

What is the most frightening of all the monsters of science fiction? I suppose everybody has his or her own favorite. And I have mine. Like the other creatures discussed in this chapter, my favorite does not have a solid body. It appears only as a color.

The thing–it has no name-is in a story called The Colour Out Of Space. The story was written in 1927 by H.P. Lovecraft.

The Colour Out Of Space is a truly frightening story. Someday you may wish to read it yourself. Let me give you one piece of advice. Don’t read it just before going to sleep.

A 2020 update of this book would probably mention that the film version of this story came out this year. And it might not mention the story at all or only in passing instead of the three page treatment it gets in the book–the longest non-movie or television treatment of text.

At any rate, I didn’t get much out of it except a reminder of some of the films I haven’t seen yet and probably won’t as they’re old and don’t appear on streaming services or in my local video store anymore. I did get an entry in my list of annual books read, though.