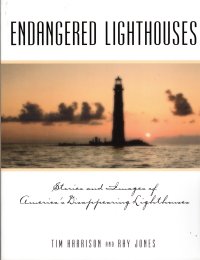 This book identifies and documents a number of lighthouses that are (or were) at risk of falling down and need preservation and restoration. The book looks at a variety of lighthouses in different regions, including the northeast, the south, and the Great Lakes (and on on Lake Tahoe, but it’s not really a lighthouse in the lighthouse sense of the word).

It gives, in dribs and drabs, some history of the Lighthouse Service, which handled lighthouses before the Coast Guard took them over, as well as information about some of the players responsible for designing multiple lighthouses and patenting lens systems. Also, some of the lighthouses were staffed and not automated until my life time.

Many were not considerered worth preservation immediately after they were decommissioned, and even now, some are nothing more than brick towers standing on some bit of private land. Although lighthouses in the popular imagination are picturesque, in many cases they were much more utilitarian structures, and one can understand why the government and locals might not have thought them worthy of preservation. Contrast them with something like water towers to get an adeqaute sense of the relationship.

Some of the relics are in parks or public locations where the locals have not allotted budget for restoration, and the book refers to a couple that are on private property (one is being restored for an AirBNB before that was a thing). Man, how cool would it be to have a lighthouse on your land? Of course, I think it would be cool because I would have the urge and perhaps someday the budget to restore it. Note that I had this exact same idea when I read A History of the Rural Schools in Greene County, Mo ten years ago.

I also got to thinking of a recent film set at a lighthouse with Williem Defoe, a Wisconsin native, and that guy from those vampire movies. I wracked my brain trying to remember the name of it, and that was especially hard because it was the obvious The Lighthouse. And now that I’ve read the plot summary, yep, that’s a movie I’m not going to watch just because I read a book about lighthouses.

At any rate, an interesting browse. Too wordy for a football game browse, but who knows when that will again be an issue.