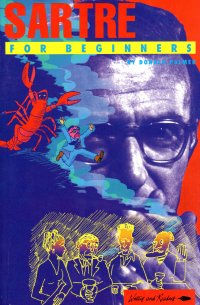 This book is a little wordier than Einstein for Beginners, but one would expect that the sort of people who would write Marxist comic books are probably better equipped to go on at length about Sartre and Existentialism than physics.

But it’s a good primer on Sartre’s thought through his career. It’s broken out by topics, but also a bit of evolution which, spoiler alert! culminates in the highest point of Sartre’s thought which is of course the defense of the Soviet Union and Stalinism found in Critique of Dialectical Reason which was not published completely in his lifetime because he could not square the circle. Fortunately, this comic book does its best to do the same. But, yeah, that’s not what Sartre is best known for and for good reason.

In case you’re wondering, Marx doesn’t appear in this book until page 3. Fortunately, though, he is clothed.

I’m getting a strange sort of pleasure out of these books. I mean, I know they’re simplistic Marxist tracts, but it’s interesting to kind of contrast my understanding of the topic with the comic book and see if I can spot exactly where it goes spinning into nonsense.