After last week’s incident with the deadly (if you choked on it) prairie ring-necked snake in the gardens of Nogglestead, I decided it would be a worthwhile goal to teach the boys to recognize various snakes of Missouri.

So I went to the Missouri Department of Conservation Web site and got a list of the snakes of Missouri. Then, in my own personal arts and crafts time, I laid them out, printed them out in color, and made a set of flash cards: 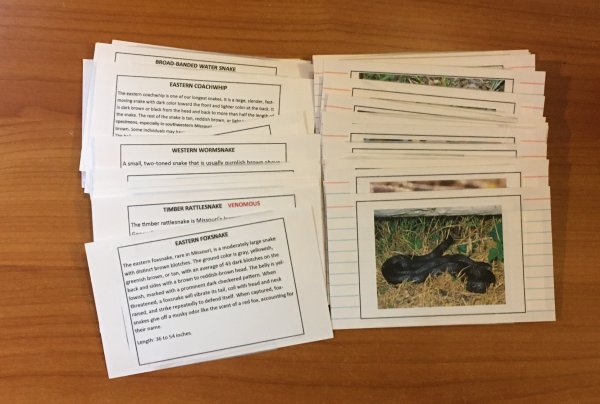 Unfortunately or fortunately, I was not zealous in selecting only snakes whose habitats include southwestern Missouri, so we have a number of snakes who have been seen in Platte City once. Maybe.

To study them, I am going to shuffle them and make each child write them out in alphabetical order and then in order of length.

And then once they’re good at identifying the snakes by the pictures on the flash cards, I’ll have made a set of cards with other pictures of the snakes so that they learn to go by the pattern and not the particular picture.

Once, when we went on a hike at the Nathan Greene homestead in Ash Grove, we came across a snake lying across the cut grass that served as a path across a wide meadow when we found a five foot snake lying across it. I didn’t have a stick to move it along, but I convinced the boys to walk around its but end slowly. After we were past, I got closer to snap a picture, and it snapped into defensive posture and moved along. It freaked the boys out so much that, although I said we’ll just keep walking and watch more closely for snakes, my youngest took off at a run, at which point he stepped on another snake which also snapped to defensive posture whilst my boy jumped straight into the air. We made it back to the trailhead very quickly, and the boys have not been eager to go hiking since.

At any rate, a useful exercise to keep them busy in between their actual school assignments.