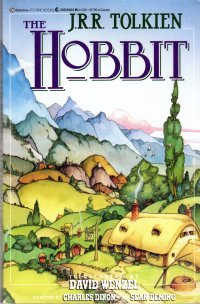 It’s been almost ten years since I read The Lord of the Rings. At that time, I said:

This is not a comic book nor a 20th century American thriller.

This, on the other hand, is a graphic novel adaptation of the one book that became three movies in the 21st century. It is a prequel of sorts to the Lord of the Rings, as Bilbo Baggins very early gets the ring and meets Gollum as part of a dwarf quest to slay a dragon (Smaug, come on, you already know the story) and reclaim their ancestral lands.

I probably have the actual text around here somewhere and will get to it one of these decades; however, this does provide a little context to the overall story kind of like I had to read the Cliff’s Notes version of A Tale of Two Cities back in high school.

I was a little surprised, though, that the death of the dragon comes two-thirds of the way through the book, and the remainder is the dwarves trying to hold off other groups who want to get the dragon’s loot. I wondered if the movies captured this, but given that it ends in a great battle that would have been very cinematic, I will guess they did. It’s not like they would have trimmed any material to make it into a trilogy.

At any rate, I read it over the course of a couple nights and enjoyed it enough. It’s funny; it’s been on my to-read shelves for a long time–I didn’t find it listed in my Good Book Hunting posts which I’ve been doing for a long time–awaiting the moment when I would want to read it, and that came up this month. I have not had comic books on my side table in a long time–I’m mourning the closure of the Comic Cave last summer, and after a short play that had also been languishing on my (Deathtrap), it was the time to read the book. I seem to go through cycles of knocking out thin, quick reads to move them from the to-read to the read shelf and then I feel the need to read one of the thick books on my shelf. I’m still coming down from Barnaby Rudge and will probably focus on thinner books for the nonce.