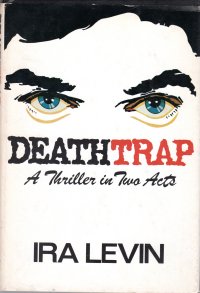 I saw the film version of this in a high school class. What was it? Drama? Media? I forget. What I do remember, though, is that it was a two day event, and the first day ended at almost the end of the first act, and I explained what I thought the trick was, and my friend and locker partner thought I had seen it. So I will spare you the spoiler and will just mention the basic plot.

A thriller playwright who sometimes does playwriting seminars hasn’t had a hit in a while, and although he doesn’t explicitly lament writer’s block, he’s really not cooking anything up. He receives a play in the mail from a student at one of these seminars and discovers it’s quite good, so he invites the student to his house down in Connecticut to–co-write the play? Murder the student and take it for his own? The playwright’s wife is unsure.

So it’s a thriller with twists and whatnot, and it’s only a two act play, so it’s pretty quick reading. I enjoyed it even though I knew the twist. And I seem to recall enough from the movie to know it departs some from the play. Which is pretty good. I’m not sure if I’ll pretty instantly remember much in thirty years of what I’m reading in 2020.