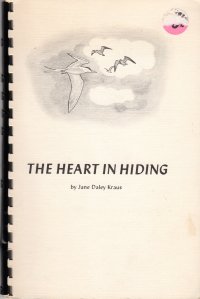 This comb-bound book has a 1981 copyright date, but the author’s autograph on the title page is dated 1990, so nine years later, she’s still signing them for people. At poetry readings/open mics? For friends? For the little bookstore down the block? I cannot tell, as it’s just a signature and the date, but that makes it seem like it was a less personal occasion and something more formal. Still, working it nine years later. I wonder if she printed that many of them in 1981 or was reprinting them as needed. It’s a lot to speculate about on a simple chapbook.

At any rate, it was a pleasant read after At the Mountains Collections of Madness. As you might recall, I didn’t care for that previous volume very much. It’s too modern, where the poems are mainly free verse which, at their worst, are inscrutible verbiage (sometimes) and, at their best, are brain dumps with little apparent craftsmanship. I also saw that the editor of the Marshfield Mail, the current Missouri Poet Laureate, posted a piece of free verse in the paper and defended it a bit as poetry a week or so back, and I thought, “Meh.”

So some better-than-average Grandma poetry was in order. Well, some Grandma poetry, which I am taking to calling the poetry written by housewives in the middle of the 20th century. The sort that filled Ideals magazine. The kind of thing Leah Lathrop and Bobbie J. Lawson, amongst many other examples scattered over this blog, wrote. Formal, rhythmic, and sometimes with an insight or two into the human condition.

This collection was written by a Long Island housewife and deals with tending to children, continuing to be in love with your spouse (and working at it), and other mid-life (that is, the bulk of life) concerns. Some are quick little hits, bits of humor about phone use back when the family only had a single phone connected to the wall and family members contended to talk on it. Some are longer reflections about family and long-term romantic relationships. Some drop contemporary references to movies and soap operas whose titles and players are forgotten in the 21st century.

Overall, a better than average collection of Grandma poetry. Some workmanship and some insight, but it doesn’t rise to the level of high art. But better than most of the dreck produced by professionals, who will also be forgotten in the ages, wherein “ages” might mean “couple of years.”