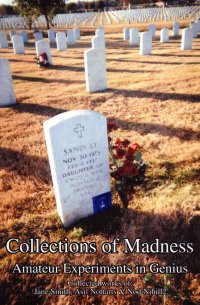 I bought this book in November and started on it because I’d stalled out on the couple of other poetry books I’ve been reading of late.

It’s a collection from nominally three poets with a marker from a veteran’s cemetary on the cover, someone who died at 22 in 1997, so a contemporary of the authors presumably who died before the late unpleasantness.

I tried to date the poems to being a couple years older than the bulk of my ouevre, but it might have been a decade past my coffee house days. So I was trying to imagine the poets as people I would have known. The first section by Jane Smith fits that mold, and the beginning of the second by Asil Nottarts started that way, but then I came to one entitled “To A Dying Man” that begins:

Nobody wants you to go, Old Man
But right now,
You are an open wound on everyone’s heart,
deep and raw.

Each cough,
each rattle,
each wince of pain
hurls a jagged stone at our tender flesh.
We wince with you
on IMPACT.

My heart
will start
to beat again…
…when yours has stopped.

You know, that is very much not what I needed to read as my godmother was dying. I mean, there’s a bear minimum of self-consciousness in the poem, maybe, that what the poet-narrator was saying was monstrous, but, no, maybe not much at all. So my poetic response to this piece, delivered as part of the oral tradition, involved many, many fine expletives and invectives. No, I oversell myself. It was one expletive applied to many, many fine things.

So the poets lost any sympathy I had, and then I muddled through the remainder of the rather pedestrian middle poet and got to the longest section by Nod Nihil2 with is more prose than poetry, a brain dump of verbiage and dime store mysticism. The words contain enough allusion to make one recognize that the poet has a college education that covers real literature, but the resulting blather is less compelling than, say, Divine Fruit by Julian Lynn. Which, strangely enough, suffers by comparison.

So, yeah, not a lot I’m going to take out of this book but some real resentment to the sentiments expressed in “To a Dyning Man” which was probably not the poet’s intent. And I rank it below the grandmother poetry I read from time to time.

It’s not enough to keep me from nosing around the poetry section at ABC Books. And this is the book that ended my 2019 reading year. Not a high note.