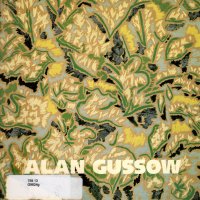 Well. This is a collection of paintings done by the named artist and exhibited in New York and perhaps on the road shortly after the turn of the 21st century. A bit of introduction explains who Gussow was and why he was important, which basically justifies the exhibition.

But ultimately, he’s a mid 20th century brush strokes and shapes on canvas sort of painter. It’s hard to find anything represented in his work but for the colors and shapes. The frontspiece is reminiscient of Guernica but without the actual, you know, distinguished shapes. So this work doesn’t rise to the level even of Picasso. Or even, heaven forfend, Matisse.

So why do I bother with monographs and collections of artists I don’t like? Perhaps I hope to crystallize things I like and to be able to explain better what I don’t. But I’m not sure that’s working. To turn Tolstoy’s quote from Anna Karenina on its head: All art that I don’t like are all alike; each piece of art I like is pleasing in its own way. And the reason I don’t like a lot of modern art is that it’s basically self conscious artist doing art that is supposed to be viewed and reviewed as art. That is, you know you’re looking at a painting. It has little content other than Hey, I’m a painting!.

Perhaps I need to review more modern art monographs to improve my explanation. Or put a little more thought or effort into it. But what am I, Driscoll or Lileks?