So last weekend, while I was in Poplar Bluff, my boys took a walk around the block. They’ve only just now earned that privilege, as the block is four miles around and is all two lane, no shoulder farm roads and state highway. But three quarters of the way around the loop, there’s a gas station where they can stock up on all sorts of things that they don’t get at home, like candy, meat sticks, energy drinks, and soda.

So the oldest bought a twelve pack of Pepsi and carried it a couple of miles home, and he was very benevolent with it. He wanted to be able to give his father a soda, so when I returned on Sunday, he kept offering me one. Which I declined. But he got very creative in his marketing plans.

The bar downstairs has an electric teapot. You put water in it and push the button, and it heats the water to the boiling point so you can make yourself tea. Mostly these days I use it to boil water to pour down the drain to clean the pipes. But it has a ring of blue LED lights at the bottom that light when the water is heating. 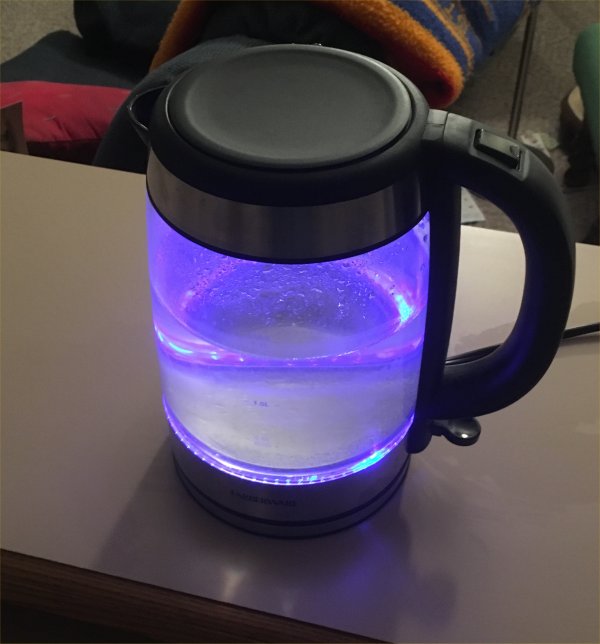 He again offered me a Pepsi, and I looked over. He had all the lights out by the bar, and he activated the teapot. The blue lights like the blue on a Pepsi can, you see.

I asked him if he put water in the pot–and as he had not, I told him to turn it off, as just heating the glass could lead to the glass cracking. So he turned it off.

At which point, I realized he had not just turned it on. He had put a can of Pepsi in it to make it into a little display case.

Which would have heated the can of soda to the boiling point, which could have led to an expressive outpouring of superheated Pepsi that might very well have shattered the glass at chest level with the young man standing about eighteen or twenty four inches away.

I mean, it might have happened that way. In my imagination, that’s what would have happened. Perhaps I’ve been overprotective as a father with that sort of imagination, but the household is probably due for a family conversation on the Ideal Gas Law.

But it also reminds me how very lucky we are.