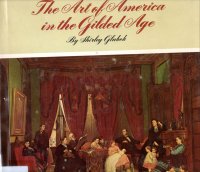 This book is not a real monograph, nor is it a comprehensive survey of art in America between the Civil War and the turn of the 20th century. It’s a very, very brief glance.

For painting, we’ve got a couple paragraphs and an image or two for Whisler, Sargent, Cassatt, members of a group called The Ten, Eakins, Remington, a couple photographers, but each really only gets a mention and a plate. Then we’ve got a couple paragraphs on the Columbian Exposition in Chicago (Didn’t Cassatt do an impressive mural for it? Yes, yes, she did, I remembered.), some pages on architecture and engineering in the last half of the last century (The Roeblings who built the Brooklyn Bridge suffered for it; the father died and the son had lingering effects from working in the caissons, I remembered).

So it’s a quick skim–the text is really only essay length–with relatively few images for the text (but the text is not dense). It was most valuble for me to remind me of things I already knew, as I have read books on Sargent, Cassatt, and Remington and the story of the Roeblings in Who Built That?.

But not a bad way to pass an hour or so.